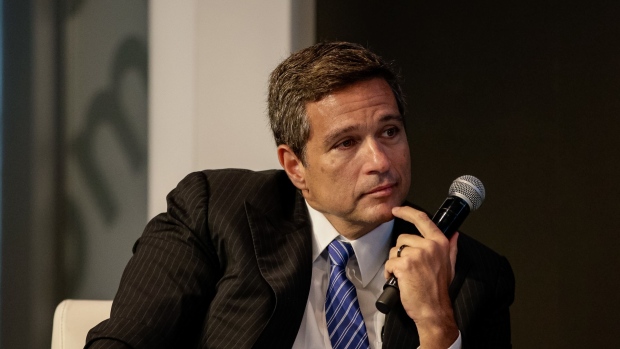 (Bloomberg) -- Shielding the central bank from political meddling in Brazil was no small feat. It took decades of cajoling and lobbying by the financial community to make it the law in 2021.

So when President Luiz Inacio Lula da Silva, just three weeks into office, questioned the need for an autonomous central bank during a national TV interview last week, it didn’t go over well in markets. Swap rates surged and the currency tanked following his remarks. Cabinet members entered the field and managed to halt the plunge that day, but the episode left many investors increasingly alarmed about a Lula presidency they are finding to be vastly different than the one that oversaw an economic boom back in the aughts.

Lula has packed his economic team with left-wing loyalists, lambasted fiscal rules and now, with his thinly veiled attack on central bank autonomy, taken a posture that raises doubts about the government’s commitment to quelling consumer prices increases in a country with a long history of nasty inflation outbreaks. The saber-rattling from Lula, and his aides in the days before him, is born in large part out of frustration, investors say, with the growing clash between their fiscal policy — aimed at boosting a sputtering economy — and the central bank’s high interest-rate policy — designed to bring inflation back down to target.

The toll in financial markets is piling up quickly. The Brazilian real has underperformed most of its developing-nation peers since Lula was elected on Oct. 30. The MSCI Brazil Index declined 2% in the same time span, bucking a 23% jump in its emerging-market benchmark.

Brazil Misses Out on Emerging-Market Rally as Lula Upends Bets

“The size and speed of changes in Brazil’s economic framework have been surprising us,” said Gustavo Pessoa, a founding partner at hedge fund manager Legacy Capital in Sao Paulo. “The central bank’s formal autonomy is a strong legacy left by the former administration and will likely prevail, but it has been tested and attacked on a daily basis.”

Investors were growing wary of potential fault-lines in the relationship with the monetary authority even before Lula’s pointed remarks on TV. His Finance Minister Fernando Haddad had hinted at the tensions, underscoring how monetary policy can hurt government revenue — the basis of his plans to narrow the fiscal gap — and signaling his discomfort with the central bank’s warnings that additional public spending would fuel inflation.

Consumer prices increases eased the most among emerging economies last year, but economists have warned that structural changes such as boosting subsidized credit or the reversal of the labor reform — both touted by some members of the Lula administration — can change that.

Central bank chief Roberto Campos Neto himself has addressed the concerns several times, saying such moves could “reduce the power” of monetary policy and reinforcing that policy makers “won’t hesitate” to raise interest rates if needed.

Concern with the path of fiscal policy and its impact on inflation has been one of the main reasons why investors have been avoiding local assets. Vista Capital had flagged an attack on the central bank’s autonomy as a “relevant risk” being underestimated by markets in a note at the end of last year, but the topic became ubiquitous following the interview, with money managers now expecting the administration to force a change in Brazil’s inflation goals.

Brazil’s Top Hedge Funds Are All Avoiding One Thing: Brazil

“Lula’s decision to publicly state twice that the inflation target should be higher did not go unnoticed, and may further reinforce increasing inflation expectations over longer periods” in the central bank’s weekly survey, JPMorgan & Chase Co. economist Cassiana Fernandez wrote in a note.

Analysts in the survey have raised estimates for 2023 inflation six weeks in a row, and also see consumer prices rising above target through 2025.

“We have no reason to believe Lula will try to have undue influence on monetary policy. Whether that perception lasts hinges on three missing pieces of the puzzle. First, whether Lula and Haddad will deliver a good, credible fiscal rule. Second, whether the government will provide cheap funding for the state-owned banks to grant subsidized lending. Finally, whether Lula will push for a higher inflation target for the years ahead. These topics are far more important than any public barbs from Lula or Haddad and the central bank.”

His pledge to stay on until the end of his term in December 2024 gives investors — in particular foreign investors — some degree of comfort that the economy won’t go off the rails. But locals are watching for what they say is the first true test to the bank’s autonomy: the appointment of a replacement for Bruno Serra, who’s expected to step down as monetary policy director in February.

Central bank independence is guaranteed in practice, not by law, Haddad said Monday evening, while adding that the autonomy set in law in 2021 is being respected. Lula has often said he gave monetary authority de-facto autonomy to set policy during his first two terms — a fact his central bank chief at the time, Henrique Meirelles, has confirmed. Still, this is the first time he’s dealing with a board he didn’t pick.

The presidency didn’t immediately respond to requests to comment on Lula’s criticism of the central bank. The Finance Ministry referred to Haddad’s Monday remarks when asked for comment.

Campos Neto plans to suggest a name for the post, with Banco Santander SA’s Sandro Sobral gaining momentum among the possibilities, according to people with knowledge of the matter, who asked for anonymity discussing private information. But ultimately it’s up to the president to name Serra’s replacement.

The central bank declined to comment on potential replacements for Serra. Sobral said there’s been no invite and therefore he has nothing to comment on.

--With assistance from Martha Beck and Simone Iglesias.