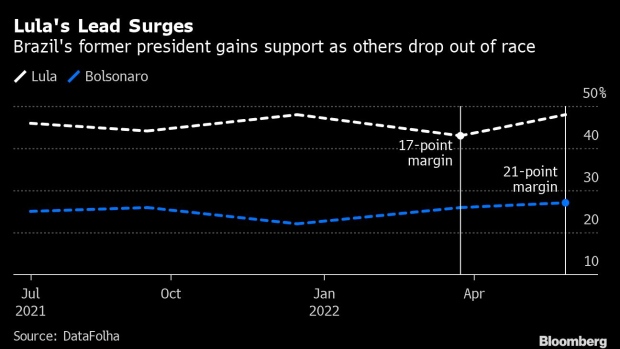 Luiz Inacio Lula da Silva, Brazil's former president, gestures after speaking during an event organized by workers' unions on International Workers' Day in Sao Paulo, Brazil, on Sunday, May 1, 2022. According to latest polling, Lula has 41% of voting intentions in the first round of presidential elections to be held later this year, against 36% for President Jair Bolsonaro. , Bloomberg

The 76-year-old leader of the Workers’ Party would win 48% of the first-round vote, while Bolsonaro would receive 27%, the survey released Thursday evening found. In a previous March survey, they received 43% and 26%, respectively. DataFolha cautioned, though, that the survey is not directly comparable with previous polls as the scenario has changed.

The findings from DataFolha, one of Brazil’s most widely-watched pollsters, differed considerably from other recent surveys that have shown the race tightening.

Lula had seen his advantage shrink in recent months after campaign gaffes that included criticizing the middle class and the illegality of abortion in the socially-conservative nation. But voters who had hoped for an option besides Brazil’s two largest political personalities appear to be increasingly throwing their support behind the two-term former president who stepped down in December 2010 with a personal approval rate of 87%.

In a distant third, former Ceara Governor Ciro Gomes is still in the running with 7% of the vote. A candidate needs to win over half of the votes in the first round in Brazil, or the race goes to a runoff.

In a second and final round, Lula would capture 58% of the vote, while Bolsonaro would take 33%, the poll found.

Datafolha interviewed 2,556 Brazilians in 181 different cities on May 25 and 26. The poll has a margin of error of plus or minus 2 percentage points.