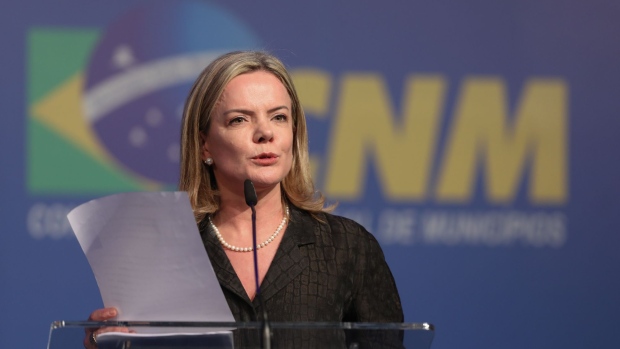 (Bloomberg) -- Brazil’s President-elect Luiz Inacio Lula da Silva has until Friday to send lawmakers a much-awaited budget bill describing how he intends to finance key campaign promises, including a large program of cash handouts to the poor, according to Gleisi Hoffmann, one of the coordinators of his transition government.

The proposal, closely followed by investors worried about the impact of public spending on inflation, won’t start moving through congress before next week, Hoffmann, who’s also the president of Lula’s Workers’ Party, told reporters on Wednesday.

Investors are particularly worried about how much the new administration intends to spend above a constitutionally mandated ceiling -- and for how long. Such concerns, coupled with additional warnings about Brazil’s fiscal credibility from central bank chief Roberto Campos Neto, caused swap rates expiring in January 2025 to soar more than 30 basis points. The real weakened 0.4% at 2:45 p.m. in Sao Paulo.

“We are clearly at an inflection point where doing more can have the opposite effect, hurting job creation,” he said at an event organized by BlackRock in Sao Paulo, referring to future spending plans.

Hoffmann said there’s agreement about the need to remove the cash-handout program from the so-called spending cap, but no consensus about how long that should last. Such a decision will require negotiating with parties outside the new government coalition, she added.

While Lula’s economists are pushing for a fiscal stance that investors consider credible, his political advisers want to ensure they line up enough funds to pay for social programs without having to negotiate spending waivers with congress every year. The spending cap would be breached by 175 billion reais ($33 billion) in 2023 just to pay for cash handouts.

“Our responsibility is to present a long-term solution,” Hoffmann said.

--With assistance from Maria Eloisa Capurro and Felipe Saturnino.