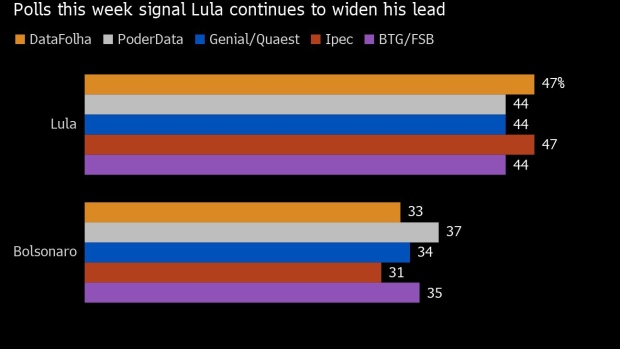 Luiz Inacio Lula da Silva, Brazil's former president, speaks during an event with the indigenous community at Parque dos Igarapes in Belem, Para state, Brazil, on Friday, Sept. 2, 2022. A fresh round of Brazil polls show that President Jair Bolsonaro's cash subsidies for the poor, a flood of campaign ads and a bad-tempered debate failed to sway voters weeks before general elections as leftist challenger Lula maintained a large lead. , Bloomberg

(Bloomberg) -- Brazil’s Luiz Inacio Lula da Silva is gaining momentum in the final days of campaigning, nearing the simple majority needed to give him a first-round presidential victory on Oct. 2, a new DataFolha poll shows.

Leftist challenger Lula would take 47% of the first-round vote, up from 45% a week ago, with the increase falling inside the poll’s 2 percentage-point margin of error. Incumbent Jair Bolsonaro held steady at 33%.

A candidate needs to break the threshold of 50% of valid votes to clinch a first-round win, otherwise the front-runners square off again on Oct. 30.

Trying to undercut each other’s support, the current and former president are crisscrossing the nation and making their final pitches. There is little room to change hearts and minds. Most voters picked their candidate long ago, and just a tiny fraction, 2% of them, identify as undecided.

Lula, 76, has been helped by a tacit endorsement from his predecessor, former President Fernando Henrique Cardoso, as well as an outpouring of support from actors and musicians, who called on fans to help secure a first-round win.

Throughout the race, Bolsonaro, 67, a right-wing nationalist, and his allies have discredited major opinion polls, claiming they are in the pocket of Big Media and political foes. They say support on the street shows the president is set to win another four-year term.

Third- and fourth-placed candidates claim 13% of voting intentions and analysts are closely watching for signs of a late-race migration toward the front-runners.

Other surveys this week also show Lula trending upward and within striking distance of wining outright. The latest release from DataFolha, Brazil’s most influential polling firm, widened its sample size to increase accuracy.

Voting is mandatory in Brazil. Pulling out null and blank votes, DataFolha now shows Lula on the margin of winning 50% in the first round.

Some political observers caution that the race is likely tighter than polls suggest: Voters may be reluctant to openly state they’re backing Bolsonaro, who is known for his crass style and botched handling of the coronavirus pandemic.

In a second and final round, Lula would take 54% of the vote, while Bolsonaro would get 38%, the poll found.

DataFolha interviewed 6,754 people in person throughout the country between Sept. 20 and Sept. 22

(Recasts lede, updates with Lula endorsements, details on polling throughout.)