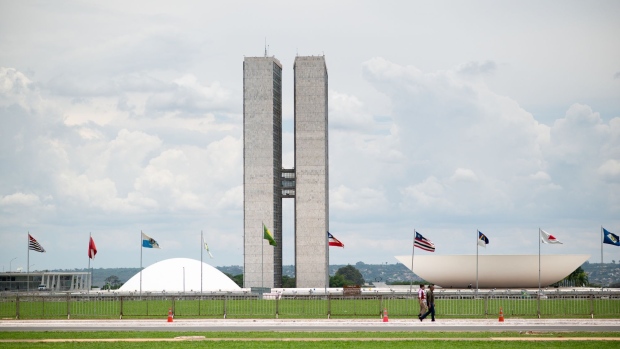 Luiz Inacio Lula da Silva, Brazil's president-elect, during a meeting in Lisbon, Portugal, on Friday, Nov. 18, 2022. Lula's transition team, in its first act, proposed a fiscal waiver for the government to spend up to 200 billion reais ($36.5 billion) more during the next few years, independent of the impact it may cause to the nation’s debt-to-gross domestic product ratio. , Bloomberg

(Bloomberg) -- Brazil’s incoming government is seeking to exempt the equivalent of 175 billion reais ($32.6 billion) per year from the country’s fiscal cap to spend it on social programs through 2026, according to a constitutional reform proposal filed in congress late Monday.

The bill, formally introduced by Senator Marcelo Castro, is the opening salvo in what’s expected to be a long political debate about how much the government that takes over on Jan. 1 will get to spend to fulfill its campaign pledges.

President-elect Luiz Inacio Lula da Silva is in Brasilia this week to kick off negotiations with lawmakers on the bill. At stake is the breach of Brazil’s most important fiscal policy buffer: a rule that limits public spending growth to the prior year’s inflation rate.

On Tuesday, Lula’s team obtained the required number of signatures to start the legislative process at the senate. “We are negotiating to approve the constitutional amendment as soon as possible,” Castro wrote in a statement.

Brazilian assets rose on Tuesday amid a rally in global markets and as traders speculated the bill could be watered down in congress.

While Lula’s team needs the extra resources to make sure it can fund its flagship Bolsa Familia social aid program, some lawmakers are reticent to support the proposal for fears of putting Brazil’s fiscal position at risk. Investors are also watching carefully as the bill is likely to impact the country’s debt sustainability and therefore, asset valuations.

While the bill proposes four years of spending above the fiscal limit, “everything could change in congress” during the negotiations, Castro told reporters in Brasilia after introducing the proposal. “What we’ll need is to reach consensus on time and value.”

To pass, the bill needs broad consensus in congress, meaning 308 of 513 votes in the lower house and 45 votes from 81 senators. Lula’s team will have to be skillful enough to guarantee such support in two rounds of votes before a Dec. 22 deadline. Yet some lawmakers are reluctant to give Lula’s government the ability to spend beyond the rule for his full four-year term and would prefer a shorter period.

While the bill introduced Monday doesn’t have a specific number to be exempt from the spending cap, the Bolsa Familia program that Lula’s team wants to keep beyond the limit costs 175 billion reais per year.

Lindbergh Farias, a key Lula ally, told Bloomberg News earlier that the incoming administration wants at least 151 billion reais per year to be excluded from the cap and that the transition team is weighing moving along with provisional measures, which require less support in congress, if the proposed constitutional amendment doesn’t advance.