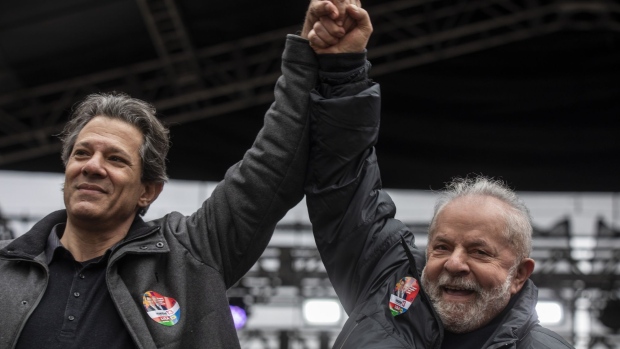 Haddad, a 59-year-old party loyalist, was announced by Lula as finance minister on Friday together with a few other cabinet members, following weeks of speculation about who would take on the most powerful and challenging jobs in the administration. One of his key missions will be to negotiate thorny proposals with congress, including an overhaul of the tax system and new spending laws that need to address growing social demands without hurting fiscal credibility.

“I hope Haddad talks about markets, but also about social problems,” Lula told reporters as he unveiled his initial picks, adding that more names will be announced next week, including for the key role of planning chief who will “have to be very aligned with the finance minister.”

The president-elect also handed the defense ministry to Jose Mucio Monteiro, an experienced politician who served as institutional relations chief in Lula’s previous cabinet and who now has the delicate task of rebuilding bridges between the leftist leader and the military. Monteiro immediately announced new commanders for the armed forces.

Lula willingly addressed the fact that his initial picks failed to include women and Black Brazilians, saying upcoming announcements will bring plenty of them.

Local markets had a largely muted reaction to the news. The currency briefly slid to a daily low before rebounding as Lula’s choice to helm the economy had been widely anticipated.

Haddad, who started his career as an investment analyst before turning to public service, is untested in major economic negotiations and will have to convince investors he’s the right person for the job. Many expected the position to be handed to an economist more aligned with the centrist group of Vice President-elect Geraldo Alckmin.

The alliance with Alckmin, who brought liberal economists including Persio Arida and Andre Lara Resende to Lula’s campaign and his transition government, was seen by investors as the biggest sign yet that the incoming administration would embrace the business-friendly economic policies sponsored by more moderate members of the winning coalition.

“Haddad’s views are largely unknown, and he’ll have to explain how he plans to tackle the country’s high public debt and low growth. His lack of experience working on economic policy and his untested market fluency put extra importance on Lula’s other appointments to the economic team.”

Following his appointment, Haddad said he will choose members of his team after Lula announces a planning minister. He tried to assuage market fears that public spending would balloon under his watch, saying the city of Sao Paulo received investment grade from ratings firms while he was mayor.

On the campaign trail, Haddad told Bloomberg News that Brazil urgently needs to regain investor confidence through a “credibility shock,” describing Lula as the right leader to carry out that mission.

Speaking at an event organized by Brazil’s banking federation on Nov. 25, however, he criticized the country’s main fiscal anchor. The so-called spending cap, which limits the growth of government expenditures to the inflation rate, did little to stop a deterioration in the quality of the public budget, he said.

That speech, seen as an initial test of his ability to communicate with financial markets, fell mostly flat: Stocks and the currency extended losses as investors worried his remarks were too vague, leaving unanswered questions about Lula’s plan to balance the budget.

Haddad had a long stint as education minister under Lula and his successor Dilma Rousseff, before becoming mayor in 2012. He was tapped by Lula to run for president in 2018, when the leftist leader was in jail and barred from the competition. He then lost to President Jair Bolsonaro. This year, he ran for the governorship of Sao Paulo state, being defeated by a candidate supported by Bolsonaro.

His loyalty to Lula during difficult times boosted his reputation within the Workers’ Party and many now see him as a natural successor to the 77-year-old leader.

Haddad holds a master’s degree in Economics and a doctorate in Philosophy from the University of Sao Paulo. He also teaches political science and is a consultant for an economics research institute.

--With assistance from Simone Iglesias.

(Updates with remarks from Lula and Haddad, commentary by Bloomberg Economics starting in third paragraph.)