"We are very pleased to see continued, strong momentum in the business," said CEO Calvin McDonald Wednesday during a conference call with analysts.

Revenue totalled $782.3 million, up about 20 per cent from $649.7 million in the same quarter the previous year. Analysts had expected a smaller jump -- about 16 per cent to $755.3 million, according to Thomson Reuters Eikon.

McDonald attributed the company's focus on product innovation, the omni-channel experience and market expansion as a driving force behind the strong results and getting the company on track for its five-year growth plan. Lululemon plans to double men's clothing and digital revenue by 2023. The Vancouver-based retailer also expects to quadruple its international revenue within five years, mostly from growth in China.

Lululemon expects to grow its core women's business in the low double digits annually over the next five years, he said, and its men's business at 20 per cent per year.

He highlighted upcoming product innovation, like a pair of new high-support bra styles to be released in the coming months, and said the company will roll out its new self-care line to 50 stores and online next week. 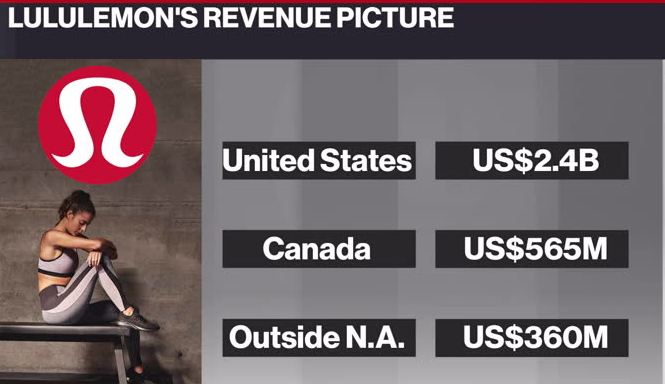 The company also expanded its buy online, pick up in store model from 35 locations to 150 in the most recent quarter and plans to do a full rollout by the end of the third quarter, he said.

The company's outlook reflects a modest impact from potential new tariffs, as well as additional costs to airfreight products in order to avoid anticipated port congestion in Asia as a result of the tariffs, said Patrick Guido, the company's chief financial officer.

The impact will be about four to five cents on diluted earnings per share for the 2019 financial year, he said, and much of that will be felt in the back half of the year, primarily the third quarter.

About two to three cents of the impact will occur regardless of if the tariffs are implemented, he said, as the company committed to higher airfreight usage to hedge against anticipated disruption in ocean shipping lanes and ensure timely delivery of new products for guests.