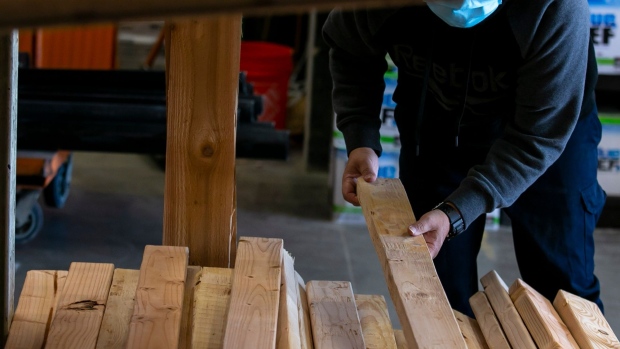 Lumber prices typically hit a lull in December, but not this year as lean inventories and strong building demand force buyers to pay up.

Futures in Chicago touched a record high US$845 per thousand board feet on Tuesday, surpassing the previous peak reached in August. Prices have been buoyed by unexpected demand from home renovations and building as people invested in their houses during the pandemic lockdowns. Inventories remain low following second-quarter production cuts.

Lumber futures are typically lower in December, when building projects usually slow down during the colder months. The unprecedented off-season rally signals that demand could continue to outpace supplies at least though early 2021, as milder-than-normal weather enables more building than usual and mills are faced with the possibility of pandemic-related production slowdowns.

“The prices have gone through the roof,” said Vince Bulic, president of Yaletown Lumber Industries Ltd., a distributor in Vancouver. “The only way they can ration supply is to increase prices. It’s hand-to-mouth buying more than anything else.”

“If they hesitated, there was a good chance the item was gone when they called back,” said in a note on Monday. “What seemed high-priced one minute was cheap the next.”

Demand is so strong that Norbord Inc., the world’s biggest maker of a plywood alternative called oriented strand board (OSB), said Monday that it will restart production at its Canadian mill in Chambord, Quebec. OSB is used to make walls, roofs and floors in North American homes.

Strength in new-home building in Canada and the U.S. is expected to continue. While U.S. permits for multi-family structures such as apartments are forecast to be down about 10 per cent in 2021 from 2020, lumber-dependent single-family home construction is projected to rise 5 per cent, along with an increase in remodeling, said Robert Dietz, chief economist at National Association of Home Builders.

In Canada, the industry is not yet at the point where higher costs will reduce the number of homes being built, said Kevin Lee, chief executive officer of Canadian Home Builders’ Association.

Order books extending out four weeks suggest much of the current sales volume won’t ship until the first quarter of 2021, BMO Capital Markets said in a Dec. 13 report.

“If demand remains strong, customers could continue to chase supply through much of 2021, and prices could come in well above expectations” for the year, according to BMO.