Lumber prices may be held in check because there’s a slowdown in orders: Prosper Trading Academy CEO

Lumber futures slid to the lowest in more than nine months after sawmills ramped up production and demand from builders stabilized.

September futures in Chicago fell as much as 4.4 per cent to US$482.90 per thousand board feet, the lowest for a most-active contract since Oct. 30. Prices have dropped more than 70 per cent from the record high reached just three months ago.

The tumble marks a stark turnaround for the common building material after strong U.S. construction demand during the pandemic spurred a surge in orders for lumber, causing prices to more than quadruple to their May peak and fueling inflation concerns. Sawmills have since increased output, and a shortage of other building supplies such as siding and windows has slowed the pace of construction, said Brian Leonard, an analyst with RCM Alternatives.

“While most of the wood out there today is pegged for a job site, the slowdown keeps it all backed up,” Leonard said. “The industry has to work through that issue before it goes back to the mills to buy. That is forcing the mills to lower prices daily to get rid of prompt wood.” 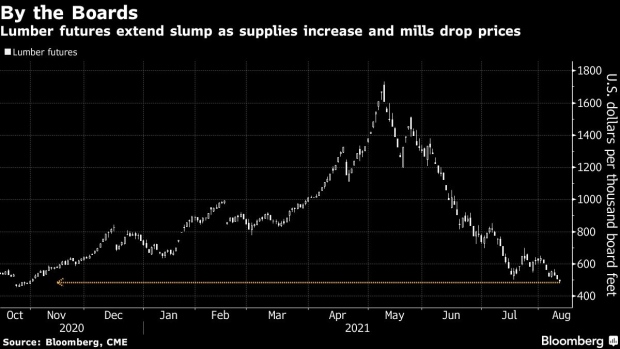 The drop-off in lumber prices has been highlighted by Federal Reserve policy makers looking to reassure markets that a surge in inflation will prove temporary.

Even the wildfires in British Columbia, which have forced some sawmills to curtail production, haven’t managed to stem the slide in prices.

“Lumber is just one piece of the building puzzle.”