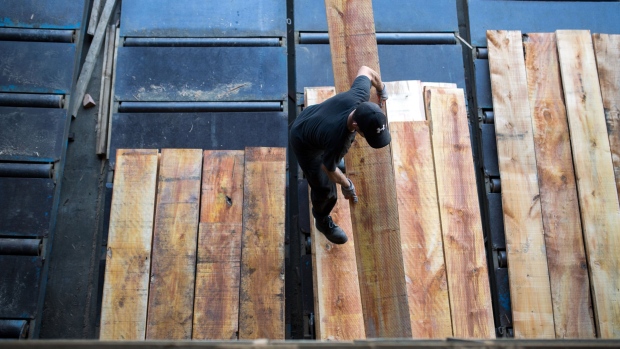 Lumber futures extended a record rally as sawmills struggle to meet insatiable demand, with the biggest U.S. producer saying it’s sold out of some key homebuilding materials for the next several weeks.

Prices have quadrupled in the past year, buoyed by an unexpected surge in home building and renovations that caught sawmills off guard with low inventories. Demand has held strong since mid-June, keeping inventories low and costs high. That’s expected to have spurred record earnings for some lumber producers while adding more fuel to surging house prices. 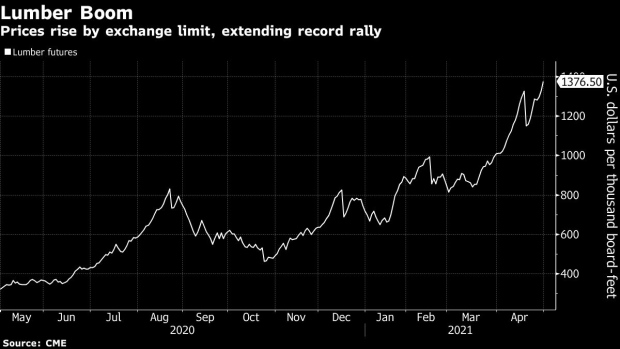 Builders are scrambling to buy the wood products that they need, and paying increasingly high prices that they must pass along to home buyers as North America heads into its peak building season. The lumber rally has lifted the price of an average new single-family home by US$35,872 over the past 12 months, according to the National Association of Home Builders.

Weyerhaeuser Co. Chief Executive Officer Devin Stockfish, speaking to analysts on Friday after the company reported record quarterly profit, said it’s sold out of oriented strand board, a cheaper and widely used stand-in for plywood, for the next five to six weeks. For lumber, the order book is sold out for the next two to three weeks, he said.

“We’re essentially off the market into the third quarter at this point, so those order files are really extended” in engineered wood products, Stockfish said. “On OSB, we’re five to six weeks out, so really at the outer edge of what we’re comfortable with in terms of order files. Even on lumber, we’re two to three weeks at this point, which for lumber is on the high end of where we typically have order files.”

Resolute Forest Products Inc. said Thursday it restarted a mill in Ontario that had been idle for two years, as well as one in Arkansas, and was running two shifts to keep up with demand. Weyerhaeuser said it expects strong residential building will keep wood demand high this year, and that the company will funnel more of its logs into the U.S. market to benefit from high prices.

The surge in lumber has ratcheted up expectations for forest-products company earnings. Weyerhaeuser’s results were slightly below estimates and shares dropped by as much as 6.6 per cent.

While builders appear to be successfully passing along higher costs to home buyers, both Canfor Corp. and Weyerhaeuser executives expressed concern about soaring homebuilding and renovation costs.