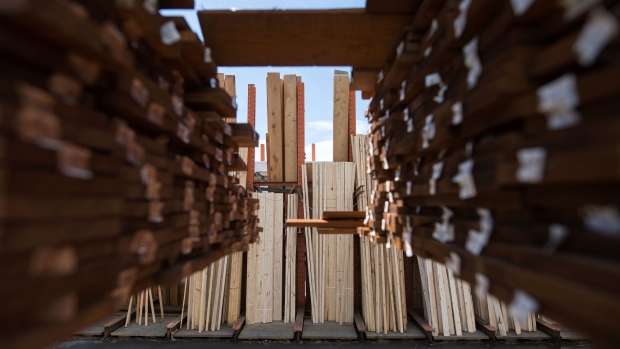 Rows of lumber at a lumberyard. Photographer: James MacDonald/Bloomberg , Bloomberg

Do-it-yourself home renovations are expected to regain popularity after taking a summer break, helping soften the blow of an expected earnings slowdown for lumber producers in the second half of the year.

The cost of wood products has swung wildly in recent months as a surge in home makeovers helped drive lumber prices to record highs, only to see demand soften when the hikes reached consumers and sticker shock set in. Lumber producers see that as temporary and anticipate consumers will return to home-improvement projects when the weather cools and lower prices hit the shelves of big-box retailers including Home Depot Inc. and Lowe’s Cos.

Weyerhaeuser Co. has already started to see signs that this market is picking up after “a little bit of sticker shock,” Chief Executive Officer Devin Stockfish said Friday during the Seattle-based company’s earnings call with analysts.

“The do-it-yourself market should be picking back up,” Stockfish said. “We would expect that to accelerate as we get into the fall, you’ll see cooler weather, you’ll see kids going back to school, vacation season will be winding down.”

Resolute Forest Products Inc. CEO Remi Lalonde doesn’t see an end to the “repair and remodel section” and said Thursday in an interview that consumers are just “taking the summer off” after being cooped up during the pandemic.

The home-improvement market could be a bright spot for North American lumber producers when the earnings are expected to cool from the first half of this year. Weyerhaeuser joined Resolute, West Fraser Timber Co. Ltd., and Canfor Corp. in posting second-quarter earnings that beat expectations, with higher lumber prices helping the company reach record profit in the period.

Still, Weyerhaeuser forecast that its timberland and wood products business will be “significantly lower” in the third quarter. Its shares dropped.

There are still uncertainties that could inject volatility into the lumber market. Producers are facing disruptions due to wildfires raging across Canada, a major producer of wood for homebuilding. Resolute temporarily stopped harvesting logs in Ontario, home to a quarter of its output, because the provincial government restricted operations that could potentially spark fires in dry conditions.

West Fraser said on Wednesday that fires in the western Canadian province of British Columbia forced it to suspend some production, and impacts will continue in the second half of the year. Interfor Corp. said Thursday that the fires will force it to curtail at least 50 million board feet of production, with more downtime possible in the following months.

Soaring costs combined with lower lumber prices have hurt income for producers in B.C., and Canfor’s top executive sees no reprieve until early next year.

“It’s tough to make any kind of income at these levels,” CEO Don Kayne said during the Vancouver-based company’s earnings call on Friday. The price of logs in B.C. is expected to rise again in October, which will challenge fourth-quarter profitability, though Kayne said these costs are expected to fall in the first quarter of next year.

Meanwhile, industries that rely on another byproduct of wood -- pulp -- to make cardboard, still struggle to meet demand that is soaring because of the rise in e-commerce sales.

“We saw the lowest inventory levels in our system than we’ve probably ever experienced,” International Paper Co. CEO Mark Sutton told analysts on a Thursday call after the company posted quarterly results that matched analysts’ estimates. Supplies were also hit by the U.S. winter storm early this year, but inventories are starting to recover, he said.