A red-hot housing market is sparking a record-breaking rally in lumber-tracking exchange-traded funds.

The US$393 million iShares Global Timber & Forestry ETF (ticker WOOD) has nearly doubled in the past year and is now at a record. Meanwhile, the triple-leveraged US$475 million Direxion Daily Homebuilders & Supplies Bull 3X Shares fund (ticker NAIL) is the second-best performing U.S. equity fund this year, according to Bloomberg data.

Home prices in the U.S. are soaring, buoyed by low rates and the work-from-anywhere phenomenon. The market is so competitive that nearly half of homes are selling within a week of listing, according to Redfin. The demand has spread to lumber, which has reached an all-time high of US$1,326.70 per 1,000 board feet -- more than four times the price a year ago -- as sawmill capacity and worker shortages choke supplies.

“How sustainable is the big question, and I’m not sure of the answer, but I think longer than assumed,” said Peter Boockvar, chief investment officer for Bleakley Advisory Group. “That said, whenever I see a chart go parabolic, it always is late stage in the move.” 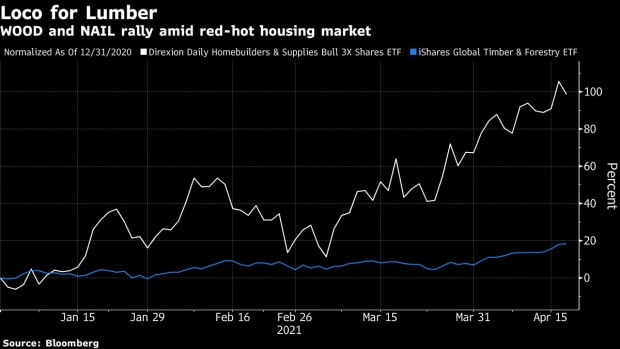 The craze continued Monday, with trading in lumber paused after futures jumped 2.5 per cent, triggering a halt on the Chicago Mercantile Exchange.

Analysts aren’t expecting any relief from the relentless lumber rally as summer approaches, which is typically the peak of U.S. home building. That’s sent cash flooding into funds such as the US$2 billion SPDR S&P Homebuilders ETF (ticker XHB), which absorbed US$215 million in March for its strongest month of inflows since 2015.

“You’re seeing elevated prices in lumber and all commodities, and perhaps it’s a sign of work-from-home protocols where people are adding on or making enhancements to their homes so you have increased demand,” said Terry Sandven, chief equity strategist for U.S. Bank Wealth Management. “It will take some time for supply to fill the channel.”