Price of lumber to remain elevated throughout year-end: Analyst

North American lumber prices will extend gains this year as homebuilding and renovations cause demand for wood to outstrip production, according to Forest Economic Advisors LLC.

“Production is going to have a hard time keeping up with demand growth as the world economy bounces back from COVID-19 in 2021-22,” Paul Jannke, the FEA’s principal of lumber, said during a conference hosted by the industry research group. That’ll keep the average lumber price this year above levels seen in 2020, he said.

Higher lumber prices could stifle the number of planned construction projects across North America and push prices for new homes even higher due to rising costs, echoing issues that hurt homebuyers in the past year. Skyrocketing lumber prices have lifted the average price of a new single-family home in the U.S. by US$24,386 in the past 10 months, the National Association of Home Builders said on Feb. 22. 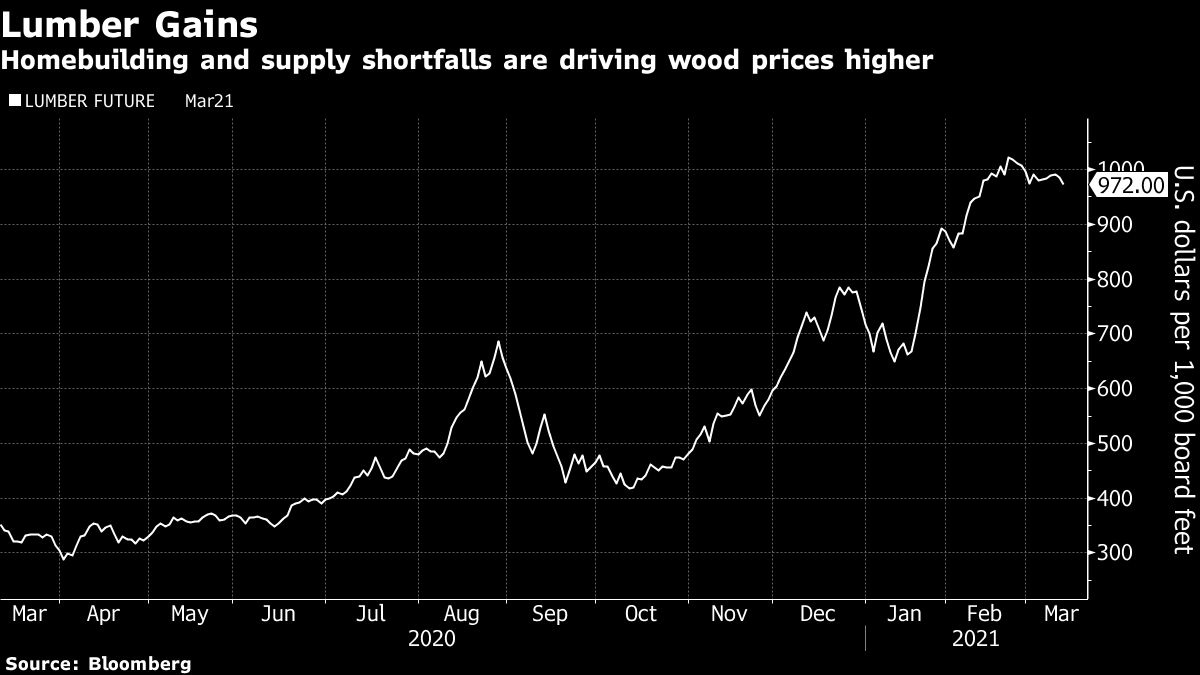 The surge in lumber demand initially took the industry by surprise in mid-2020 as the pandemic fueled a flurry of home renovations while homebuilding soared. Lumber futures rallied to record highs above US$1,000 per 1,000 board feet in February, driven in part by low supplies of wood products. The contract, which averaged around US$456 last year, was at US$972 on Thursday.

Renovation activity is expected to stay “extremely strong,” according to Brendan Lowney, principal of macroeconomics at FEA. “We’ll come off a boil, but we expect that market to still run hotter than it has in the last 10 years.”

North America’s lumber deficit will mean that more wood product needs to be imported from Central Europe, where a beetle infestation has killed trees and led to increased logging, according to Jannke. Unlike the U.S., European lumber production is expected to exceed consumption, allowing Europe to boost its exports, he said.

U.S. lumber imports will need to increase by roughly 14 per cent to 15 per cent this year, Jannke said. China has also increased its appetite for lumber, and FEA forecasts the Asian nation will need to boost imports by around 14 per cent.

“There’s not going to be enough fiber to supply global demand for saw timber over the next decade,” Jannke said, adding that only the southern U.S. and Russia have significant amounts of excess timber. “We find it hard to see where this fiber’s going to come from.”