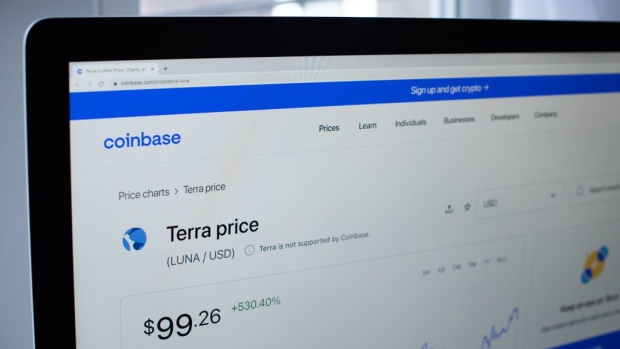 Terra's Luna token value on the Coinbase website on a computer arranged in Hastings-on-Hudson, New York, U.S., on Friday, April 8, 2022. A nearly 20% interest rate is unheard of in most of traditional finance. But that's exactly what Anchor Protocol is promising people willing to deposit the crypto stablecoin UST into its decentralized finance app. , Photographer: Bloomberg/Bloomberg

(Bloomberg) -- From borrowing and lending platforms to synthentic equities to simply trying to build a stable proxy for the US dollar, cryptocurrency projects have long attempted to reimagine traditional financial vehicles for the age of the blockchain.

Now, after the values of both the Luna and TerraUSD coins have collapsed in dramatic fashion, something that in broad strokes resembles an old Wall Street tactic is being revived in hopes of saving the project behind them -- death-spiral financing -- as well as another money-raising tool favored by strapped companies, a PIPE, where stock is sold to institutions at below-market prices.

As the phrase implies, death-spiral financing is when desperate companies raise capital by issuing a type of convertible bond that can lead to a flood of shares in the market, potentially dooming the stock price. The last-ditch effort to save an insolvent company is so fraught with risk that modern Wall Street firms tend to avoid getting involved, though it’s been seen more commonly in recent years in the sketchy corners of the penny stock market.

In the latest example of the crypto world imitating traditional finance, backers of the TerraUSD algorithmic stablecoin (known as UST) are trying to raise about $1.5 billion to shore up the token after it crashed from its dollar peg, according to the founder of a firm that was approached about the deal from the Luna Foundation Guard, a consortium set up to help UST maintain a $1 value. Investors would be able to buy the Luna cryptocurrency -- a coin with fluctuating value that’s used on the other side of arbitrage trades meant to keep UST pegged at $1 -- at a 50% discount to the spot price. The LFG didn’t immediately respond to requests for comment.

That spot price is a swiftly moving target, however. Luna traded for more than $116 in early April, but a crisis of confidence in the project has caused its value to crash to as low as 84 cents on Wednesday, according to CoinMarketCap.com. The UST stablecoin that’s always meant to be worth $1 traded for less than 30 cents on Wednesday before rebounding to about 50 cents.

To Max Gokhman, chief investment officer for AlphaTrAI, selling something that’s crashed so hard at a 50% discount is like a bad joke.

“There’s catching falling knives and then there’s standing outside when it’s raining chainsaws,” Gokhman said. “This feels like the latter.”

Terraform Labs, which created the Terra blockchain where Luna and UST were born, is backed by some of the deepest pockets in the industry, including Coinbase Ventures, Galaxy Digital and a host of others. Yet skepticism is rampant that Terra will be able to line up enough financing to save its stablecoin from a death spiral.

The Luna Foundation Guard, which the project set up to help UST maintain a $1 value, had been on a Bitcoin-buying binge in hopes that holdings of the oldest cryptocurrency could be used in tandem with the Luna token to safeguard the stablecoin’s value.

Yet crashing values of both Luna and Bitcoin made maintaining that $1 peg harder and harder.

Read more: Bitcoin’s Most-Watched Whale Is the King of the ‘Lunatics’

In order for Terra to issue enough Luna to get UST back up to $1, dilution of as much as 1,000% may be needed, according to Kunal Goel, an analyst at crypto-research firm Messari. The resulting mismatch between demand for Luna and supply of UST from investors fleeing Terra’s borrowing and lending protocol Anchor may prove to be fatal.

For Stephane Ouellette, chief executive of FRNT Financial Inc., even a 50-cent value for UST seems odd. The stablecoin that currently had a market value of about $7.5 billion as of Wednesday morning is backed by somewhere between $1 billion and $2 billion of assets, he said.

“The whole thing looks like it’s headed to zero anyways,” he said.