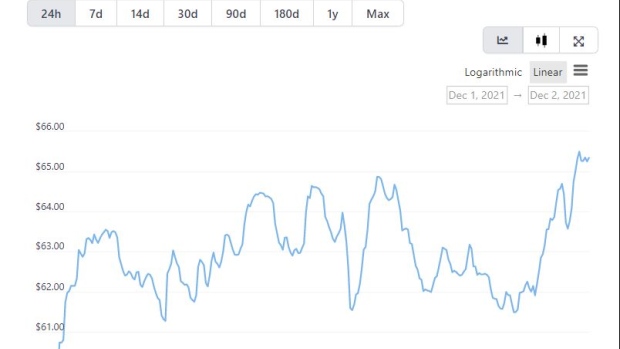 (Bloomberg) -- Terraform Labs’ Luna token is climbing into the ranks of the largest cryptocurrencies amid changes in how the coin is used for its blockchain payments network and optimism about the potential for decentralized applications.

Luna has jumped about 60% in the past seven days, according to pricing from CoinGecko, making it the 12th-largest cryptocurrency with a market value of around $25 billion. The surge comes as Singapore-based Terraform is embroiled in a dispute with the U.S. Securities and Exchange Commission over whether the platform is selling unregistered securities.

“Crypto is all about creating a buzz and there’s a lot of attention on the Terra ecosystem, be it for DeFi innovation, stablecoin products, a recent network upgrade or Luna staking,” said Antoni Trenchev, co-founder of crypto lender Nexo. It’s “the latest shiny thing in the crypto space, following in the footsteps of other blockchains like Solana and Avalanche, all which have witnessed explosive gains in the past year.”

A governance proposal for the network was recently approved to destroy, or burn, about 88 million Luna from the community pool, swapping it for UST, Terra’s stablecoin. UST itself now has a market value of $7.7 billion, compared with $2.9 billion on Nov. 10. Developers of cryptocurrencies often burn coins to increase scarcity.

“Luna’s economics are built to be deflationary, and over the past month we’ve seen 100 million Luna tokens be burned, which removes them from supply forever,” said Hayden Hughes, chief executive officer of Alpha Impact, a social-trading platform. “This reduction in supply combined with the popularity of Luna staking (where staking participants get new tokens) has created a supply shock that has driven up the value.”

In addition many regulators globally, including in the U.S., have expressed interest in boosting the regulatory framework around stablecoins.

“Mostly everything we do as a company supporting the Terra ecosystem and third-party projects that build and develop creates more demand for UST, closing the ‘demand loop’ with many use cases for UST ranging from payments, to savings, and investing,” said Brian Curran, head of communications at Terraform Labs. “As a result, Luna’s price dynamics are mostly a function of the demand for UST, and by extension, the demand for using UST across various applications and blockchains.”

Luna may also be getting a boost as so-called cross-chain bridges like Wormhole have begun gaining traction and are allowing Terra to export UST to other blockchain networks where it’s supported. In addition, Terra has started some partnerships for Metaverse games, with names like Summoner’s War. Terra ranks fifth in smart-contract chains by total value locked, with around $12.6 billion, according to DefiLlama.