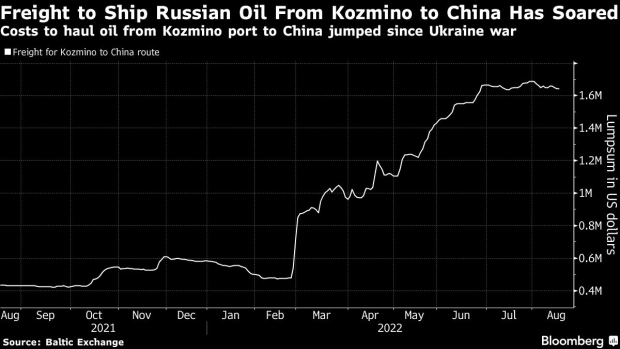 Oil tanker MS Sikinov, operated by Sikinos II Shipping Corp, refuels at a fuel storage facility at the Big Port of Saint-Petersburg in Saint Petersburg, Russia, on Monday, Oct. 17, 2016. Oil tanker rates jumped to a four month high as traders booked the most cargoes for the time of year on record, offering signs that Middle East producers could be adding barrels to the market just before OPEC embarks on its deepest output cuts in eight years. , Bloomberg

(Bloomberg) -- The fallout from Russia’s invasion of Ukraine is still making waves in the shipping market, with more older tankers being deployed on the lucrative route hauling the nation’s oil from the Far East to China and India.

At least four tankers 15 years or older have joined the pool of vessels delivering Russian oil from Kozmino since May, according to shipbrokers who asked not to be identified. The port usually handles about 30 cargoes of ESPO crude a month using Aframax vessels, which carry about 700,000 barrels.

While Western sanctions against Moscow following the invasion put some shipowners off from handling the OPEC+ producer’s cargoes, the upheaval has inflated earnings for those still in the trade and lifted vessel valuations, too. Profits for shippers on the Kozmino-to-China route are still about triple the level seen before the outbreak of war, although they’ve eased slightly.

Although ships that are 15 years old remain sea-worthy, they tend to be less efficient than newbuilds and may require more maintenance. Still, the short, five-day voyage from Kozmino to China, coupled with high profits from plying the route, have combined to attract the aged vessels.

To draw business, these arrivals have been offering slightly lower prices, bringing down rates on the route, the shipbrokers said. The so-called lumpsum cost for a delivery from Kozmino into China is now about $1.5 million, a touch below the peak of $1.7 million seen in June and July, they said.

The opportunities have stoked interest in used ships. So far this year, the value of older Aframax ships has increased by nearly 60%, with a 15-year-old tanker now worth about $29 million, according to VesselsValue data.

Even after the recent dip in freight rates, prices are still “inflated compared to historic averages,” said Olivia Watkins, head valuations analyst at VesselsValue. That’s led to owners to want to take advantage, she said.

So far this year, 58 Aframaxes have changed hands, 50% more than in the same period last year, according to VesselsValue. Some of the vessels new to the route were bought by shipowners registered in Vietnam and Hong Kong, according to data tracked by Bloomberg and shipbrokers.