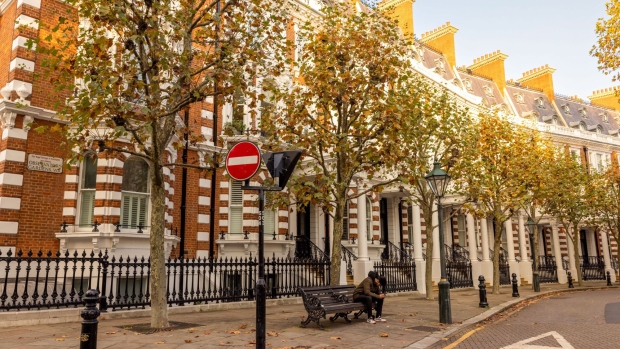 (Bloomberg) -- Middle Eastern buyers of prime real estate in central London hit a four-year high in the second half of 2022, when they took advantage of the weak pound and relaxed covid restrictions, according to property consultant Knight Frank LLP.

Buyers from the region accounted for 11% of property transactions in some of London’s most prestigious postcodes, putting them just behind investors from Europe and the UK. The last time buyers from the Middle East made up a higher proportion of sales in the area was in 2015, Knight Frank said.

“Compared to some parts of the world, buyers from the Middle East have been relatively free to travel to London and take advantage of the weak pound, which has resulted in discounts of more than 40% compared to 2014 when price and currency movements are combined,” Tom Bill, head of UK residential research at Knight Frank, said in a statement.

At the peak of the pandemic during the first half of 2020, investors from the Middle East accounted for just 2.2% of all of the sales in London’s top postcodes as the region — along with much of the world — enforced a series of strict social restrictions to limit the impact of the virus.

After some initial constraints, Middle Eastern countries such as the United Arab Emirates largely stayed away from the full-scale lockdowns seen around the globe, instead relying on strict mask mandates and inoculations. The government’s nimble handling of the pandemic drew in visitors from around the world looking to escape curbs in their home countries. Dubai, part of the UAE, had one of the world’s fastest vaccination rollouts.

London, which has long attracted huge swathes of foreign investment and drew in the most capital inflows of any global city in the first half of 2022, this year faces uncertainty over property valuations as interest rates rise and in the wake of political chaos triggered by September’s mini-budget. Foreign dealmakers accounted for 57% of London real estate investment last year, compared with 65% in 2015, according to data compiled by MSCI Inc.

“Wealthy families are not looking at London as a one or two year play, they are taking a long-term view, typically committing for the next 50 years,” said Henry Faun, head of Knight Frank’s Private Office in the Middle East. “Investors remain bullish on London’s outlook; the Emirati clients I am speaking with feel it currently offers an opportunity not matched elsewhere globally and will bounce back strongly as it always has.”

8 Eaton Lane, one of London’s newest prime residential developments where two-bedroom apartments start at £3.8 million has attracted significant interest from buyers in the oil-rich Gulf region since sales began late last year, according to Knight Frank. The Grade II listed building in London’s Belgravia is being developed into 42 residences and seven retail units with amenities such as a gym, spa treatment rooms, swimming pool, cinema and business suite.