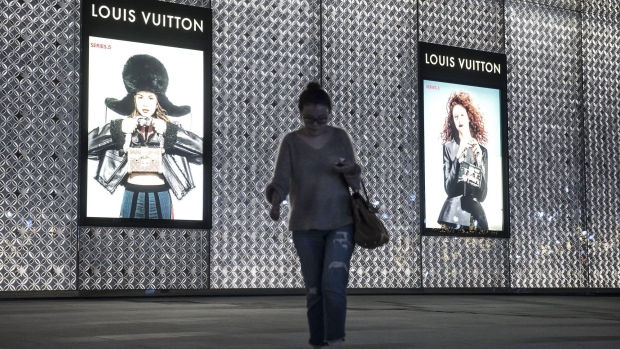 A pedestrian walks past a LVMH Moet Hennessy Louis Vuitton SE fashion boutique at night in Shanghai, China, on Tuesday, Oct. 25, 2016. The world's luxury-goods market stopped growing this year, according to a forecast from researcher Bain & Co., as the industry struggles to emerge from one of its weakest periods since the global recession. Photographer: Qilai Shen/Bloomberg , Bloomberg

The acrimony between LVMH and Tiffany & Co. escalated a day after the French luxury giant moved to back out of its US$16 billion purchase of the iconic jeweler.

The owner of Louis Vuitton said Thursday it plans to sue Tiffany to challenge its management during the pandemic crisis. On Wednesday, the jeweler had launched its own suit to force LVMH to stick to the terms of the deal.

The tit-for-tat maneuvers show how rancorous the relationship between the companies has become after months of uncertainty over whether LVMH would go ahead with the luxury industry’s biggest takeover. The coronavirus looks set to send sales of personal luxury goods plunging this year.

It also emerged that LVMH chief Bernard Arnault, France’s richest man, asked for help from the French government in an effort to pull out of the transaction, according to a person familiar with the government’s thinking. LVMH denied what a spokesman called “malicious and totally unfounded” allegations.

In moving to call off the purchase of Tiffany on Wednesday, LVMH said the French government requested that it delay the deal for reasons related to a U.S.-France trade dispute. Tiffany countered with a lawsuit, filed in Delaware, accusing LVMH of leveraging protests against police brutality and the Covid-19 pandemic to seek a lower price.

LVMH rebuffed those accusations on Thursday. It lambasted Tiffany’s performance since the start of the year and said its prospects were “very disappointing.” The luxury conglomerate in particular criticized Tiffany’s payment of dividends at a time when the company was “loss making.”

“LVMH therefore confirms that the necessary conditions for the conclusion of the acquisition of Tiffany are not fulfilled,” the French company said in a statement.

LVMH also defended itself against charges by Tiffany that it used delaying tactics, notably with competition authorities in Europe, to try to renegotiate the merger price and “run out the clock.”

“This accusation has no substance and LVMH will demonstrate this to the Delaware court,” the company said, adding that it will file for an approval with the EU Commission in “the following days,” and expects this authorization to be granted next month.

LVMH’s latest legal threat is likely to make matters even more coFmplicated for Tiffany, whose shares fell 6.4 per cent on Wednesday, by entangling the company in expensive and lengthy litigation.

--With assistance from Chris Dolmetsch and Kim Bhasin.