The San Francisco-based company said in a statement Tuesday it had 17.8 million active riders in the quarter, up 32 per cent from a year ago but fewer than before the pandemic. Analysts were expecting 18 million. The active rider metric includes its bike-sharing business which sees a seasonal decline in cold-weather months, Lyft co-founder and President John Zimmer said in an interview.

The share slump came as Lyft said revenue reached US$875.6 million in the period, up 44 per cent from a year earlier. That was more than the US$844.5 million analysts were expecting, according to data compiled by Bloomberg. Lyft’s adjusted earnings before interest, tax, depreciation and amortization were US$54.8 million in the quarter, far surpassing the US$14.4 million analysts were expecting.

“We’re about 70 per cent recovered versus 2019 levels and we’ve got a lot more runway left,” Zimmer said. “The more this pandemic becomes an endemic, the closer we’ll get to narrowing that gap,” he said. 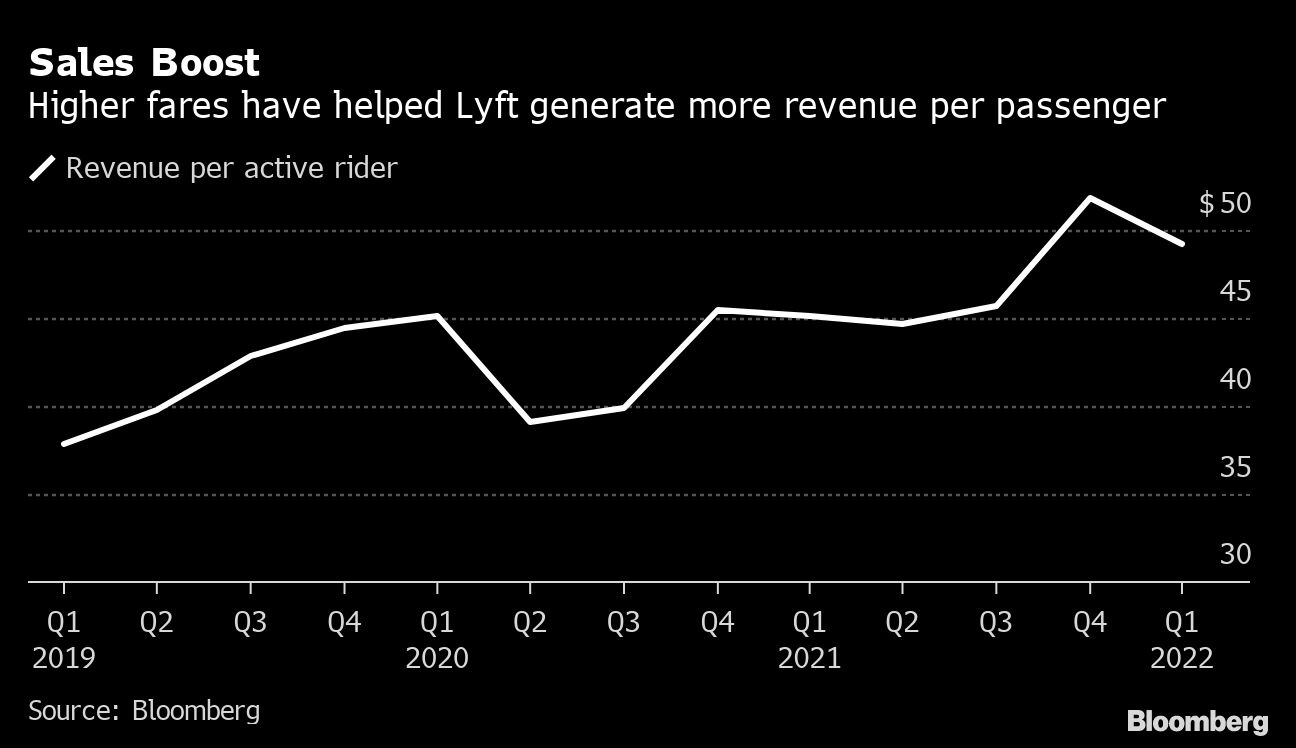 The boost in profits is attributed to strong ride volumes but also from the increase in revenue Lyft extracted from each passenger. Lyft generated US$49.18 per active rider in the first quarter, the second-highest on record and 9 per cent higher than the same period last year, partly due to higher fares.

Ride-hailing demand proved resilient during the quarter even after the spread of the COVID-19 omicron variant briefly dented ridership in January. For the past year, Lyft and rival Uber Technologies Inc. have struggled to find enough drivers to meet resurgent customer demand and the imbalance has led to longer wait times and high fares for riders. The companies have doled out bonuses and other incentives to lure drivers back.

However, those efforts were dealt a setback after gas prices spiked during the quarter, putting pressure on workers’ take-home earnings and casting doubt on rideshare platforms’ ability to retain them. In response, both Lyft and Uber introduced a gas surcharge to rides in a bid to help drivers. Zimmer did not say whether the surcharge would be extended but indicated Lyft will be “supporting drivers” if fuel costs continue to rise.

The number of drivers grew 40 per cent from the previous year, Lyft said in a presentation accompanying results. The average rideshare trip in the U.S. cost approximately US$20 in the first quarter, up approximately 45 per cent versus the same period in 2019, according to market research firm YipitData. Zimmer said the company “has room to improve” service levels, or wait times, which came down by about 30 per cent in the first quarter.

“The first quarter had a lot of disruptive factors,” CFRA Research analyst Angelo Zino said before the numbers were released. “While a high revenue per rider helps profitability, longer-term we want to see that figure come down to reflect a sustainable rideshare pricing model. Maintaining a growing rider base is key.”

Unlike Uber, which pivoted into food delivery during the pandemic with Uber Eats, Lyft’s core business is ride sharing. The company has expanded into other forms of transportation like bikes and scooters in some of its biggest markets such as New York City, San Francisco and Chicago. Still, Lyft’s ability to grow its rider base could be challenged by Uber’s partnerships with New York City and San Francisco taxi-hailing apps that would migrate cabbies to Uber’s platform.

Zimmer said that the second quarter will “kickstart the next year of growth” and that the company will make investments to boost brand awareness, expand other revenue streams like its last-mile delivery offerings, and in incentives to add more drivers to the platform.