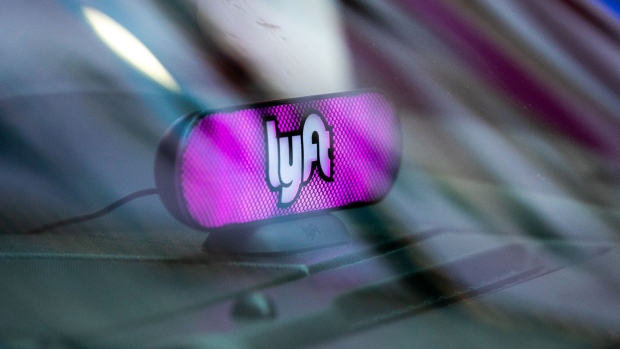 A Lyft Inc. light sits on the dashboard of a vehicle in the Time Square neighborhood of New York, U.S., on Wednesday, May 8, 2019. Simmering tensions between drivers and ride-hailing companies are flaring again, as drivers in major cities across the U.S. and the U.K. went on strike Wednesday over low wages and unstable working conditions. Photographer: Jeenah Moon/Bloomberg , Bloomberg

(Bloomberg) -- Lyft Inc. said it will freeze hiring in the US at least until next year, amid economic instability that’s rattled the ride-hail giant’s stock price.

“Like many other companies navigating an uncertain economy, we are pausing hiring for all US-based roles through the end of the year,” a spokeswoman said in a statement.

The move is an extension of Lyft’s decision to slow hiring in May. The San Francisco-based company has been focused on reining in costs and maintaining profitability in the face of a deteriorating economic outlook. Its stock has slid 67% this year compared with a 23% decline on the S&P 500 Index.

In July, the company said it planned to shutter its car-rental business and cut about 60 jobs. While Lyft, which had about 4,500 employees at the end of 2021, currently has no plans for further layoffs, that could change if economic conditions worsen, according to the spokeswoman.

(Updates with additional comments from a spokeswoman in the fourth paragraph.)