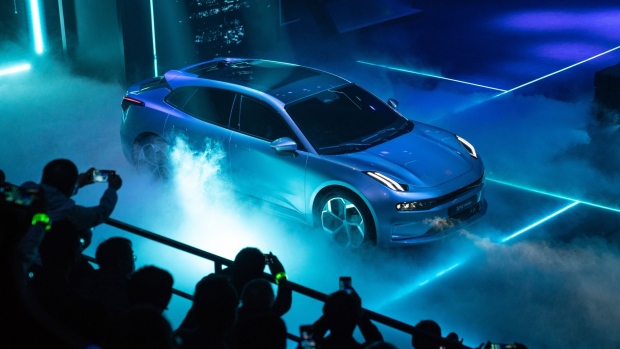 The Geely Automobile Holdings Ltd. Lynk & Co. Zero Concept vehicle is unveiled during a launch event in Beijing, China, on Wednesday, Sept. 23, 2020. Zhejiang Geely Holding Group Co., the Chinese carmaker whose stable of brands includes Volvo and Lotus, said the underpinnings of a new electric model coming next year will be offered up to other manufacturers. , Bloomberg

(Bloomberg) -- Chinese-Swedish automaker Lynk & Co. is aiming to lift sales to 1 million vehicles over the next two years by pushing into new markets in Asia and the Middle East, and targeting young, affluent drivers with a new sports-utility vehicle.

Created five years ago by Geely Auto and Volvo Cars -- two carmakers under the umbrella of China’s Zhejiang Geely Holding Group Co. -- Lynk has established a foothold in European markets like Germany, Denmark and Belgium, where it also offers a car-sharing plan. It’s now looking to start exports to other Asian nations, as well as places like Kuwait and Israel, Lin Jie, a senior vice president at Geely Auto and general manager of Lynk Sales Co. said in an interview.

For now, the push into Asia and the Middle East will follow the traditional route of outright purchases, as opposed to the subscription plan Lynk offers in Europe. There, for 500 euros ($580) a month, members get 1,250 kilometers (776 miles) of driving, while maintenance, insurance and taxes are also covered. A new app will soon allow a subscription to be split between family and friends, or for a member to rent their car out at an hourly or daily rate, offsetting their monthly fee or potentially even allowing them to turn a profit.

Sales in China, which also focus on outright ownership, rose 40% in the first nine months of this year to 147,960 units -- more than electric-vehicle upstarts Nio Inc. and Li Auto Inc. combined. Total exports to Europe in the first nine months stood at 7,950 vehicles. About 25% of its European sales have gone to subscription members. All up, Lynk has sold about 570,000 cars.

“Lynk is still a new brand in its juvenile era and we will try our best to anticipate consumers’ needs and satisfy them,” said Lin. “We’re speeding up expansion overseas and making the car available to more users around the world.”

Lynk’s approach for sharing among friends or within companies is an example of how automakers are trying to adjust to evolving concepts of vehicle ownership. So far results have been mixed, and several carmakers have abandoned subscription services. Car-sharing offerings, while popular, have struggled to produce attractive returns, and many have quit operating in unprofitable locations.

To help with the sales goal, Lynk also on Wednesday unveiled a luxury SUV in Shanghai, which received 6,000 preliminary orders on the first day of pre-sales last month. The car, targeting younger, affluent drivers, is the first Lynk model underpinned by Volvo’s Scalable Product Architecture. Aimed at increasing safety by utilizing technology, the system has also been used for Volvo’s XC90 and S90, and the hybrid Polestar 1.

Lynk plans to expand its car-sharing model to the U.S., Chief Executive Officer Alain Visser said in an interview in March. The business model will be viable in the U.S. as trends are shifting toward sustainability and people question the concept of car ownership, Visser said at the time.

On Wednesday, Visser doubled down on those comments, saying the company’s business model was viable.

“European customers after 100 years are tired of the same thing, of marketing with a nice car driving around a curvy road,” he said. “I think there’s a growing percentage of people who say ‘I’m fed up with this.’ We’ve positioned ourselves not like a car brand, but an alternative to the car industry.”

Like all other automakers, however, Lynk has been hit by the global chip shortage, Lin said. It currently has a stockpile of about half its monthly sales, which is more than 50% short of the usual industry standard, he said.

Despite the challenges, Lynk expects to post its first profit this year, Lin said, without giving any further details.