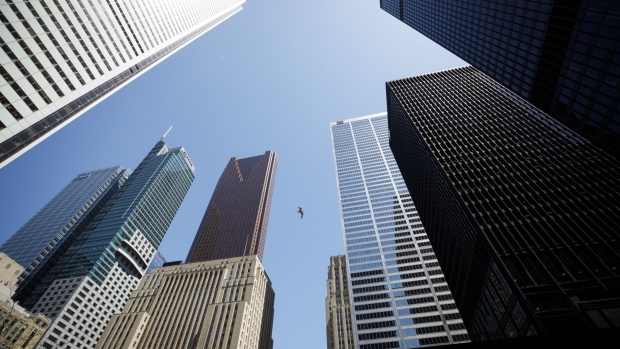 A bird flies between office towers in the financial district of Toronto, Ontario, Canada, on Friday, May 22, 2020. , Bloomberg

Global merger and acquisition activity clawed its way back from near-decade lows in 2020, facing down the COVID-19 pandemic with a string of large transactions in the second half of the year that dealmakers hope will continue.

Deal volumes are now down about six per cent for the year to US$3.5 trillion, according to data compiled by Bloomberg. Still, the fact that about two-thirds of those were inked since the start of July has advisers talking about a dramatic comeback, after the first half of 2020 froze M&A and sent North American deal activity down more than 50 per cent.

How transactions got done also changed, as bidders flew drones to conduct due diligence and the head of a U.K. pharmaceutical giant inked his biggest-ever deal while quarantined in a hotel room in Australia. Globe-trotting bankers transitioned to days of nonstop video calls, either from home or nearly empty offices.

“We saw a sharp decline in M&A activity after the outbreak of the pandemic but then a very strong recovery in the second half of the year,” said Berthold Fuerst, co-head of investment banking coverage and advisory for Europe, the Middle East and Africa at Deutsche Bank AG.

As the pandemic shut down cities in the first quarter, companies around the world scrambled to move their businesses online and organize newly remote workforces while plugging holes in their supply chains. The chaos left chief executive officers too busy to make acquisitions, and dealmaking got off to the slowest start since 2013.

Instead of opportunistic mergers, most of the deals that were struck helped companies stay afloat, particularly the travel, hospitality and entertainment businesses hit hard by lockdowns. Airlines sought federal aid while others secured private equity investment.

The situation started to stabilize as companies realized they could operate in the new environment, said Scott Barshay, chair of the corporate department at law firm Paul Weiss Rifkind Wharton & Garrison.

“All of a sudden, you could see a real shift in thinking to what will the world look like post-pandemic, and how do we put ourselves in the best position to succeed post-pandemic?” Barshay said in an interview. “It seemed to be coming from companies in all sectors all at once.”

That renewed desire to do deals converged with the lead-up to the U.S. election, as companies rushed out announcements to avoid market volatility around the contentious vote. Joe Biden’s victory -- combined with a divided Congress unlikely to push through major tax changes -- was seen as a stable outcome. Paired with positive vaccine news, that set the foundation for the M&A floodgates to open.

More than US$1.3 trillion of deals have been announced in the fourth quarter alone. S&P Global Inc.’s all-stock US$39 billion acquisition of IHS Markit Ltd. came on the heels of technology megadeals including chipmaker Advanced Micro Devices Inc.’s US$35 billion purchase of Xilinx Inc. and Salesforce.com Inc.’s agreement to buy Slack Technologies Inc. for US$27.7 billion including debt.

“People became more optimistic and confident,” Stephan Feldgoise, global co-head of mergers and acquisitions at Goldman Sachs Group Inc., said in an interview. “For those who didn’t want to use stock in a transaction, they were able to get commitments and liquidity from the banks, enabling them to also do cash deals.”

Goldman Sachs was the busiest adviser this year, working on US$814.5 billion of transactions, followed by Morgan Stanley and JPMorgan Chase & Co., according to data compiled by Bloomberg.

The coronavirus also revealed vulnerabilities that pushed CEOs to make changes now, instead of in five or 10 years like they were planning, said Cary Kochman, co-head of global M&A at Citigroup Inc.

“What this shock has done is force rapid implementation of these strategic plans,” Kochman said.

Beyond North America, Europe was a bright spot for deals compared to recent years. Deals involving European companies have risen about 6 per cent this year to US$1.2 trillion, according to data compiled by Bloomberg. Maja Torun, head of France investment banking at JPMorgan, said companies hurt by COVID could become more active in divesting assets next year.

“We are expecting a very active M&A in 2021 driven by both COVID winners and COVID losers,” she said. “Health care or technology players in Europe will continue to consolidate while benefitting from very favorable share prices as deal currency.”

Asia Pacific came back the strongest in the second half: deal volumes are now up 13 per cent for the year to US$1.3 trillion. The region could extend its recovery into 2021 as it heads toward stronger economic growth led by China. Japanese corporates could also emerge as active buyers globally again, according to Rohit Chatterji, JPMorgan’s co-head of Asia Pacific M&A.

“We’re likely to see an increase in deals, including outbound transactions amid a more stable external environment,” he said.

Despite 2020’s challenges, most of the factors that drove the deal boom of recent years haven’t gone away. Companies have access to easy financing, and buyout firms have a record amount of dry powder. The swift rise in special purpose acquisition companies has also created a new class of public companies that could be the next consolidators.

“We’ve had this enormous surge having begun the year coming off a good but softening market, and we are now envisioning 2021 to surpass 2019,” Citigroup’s Kochman said.