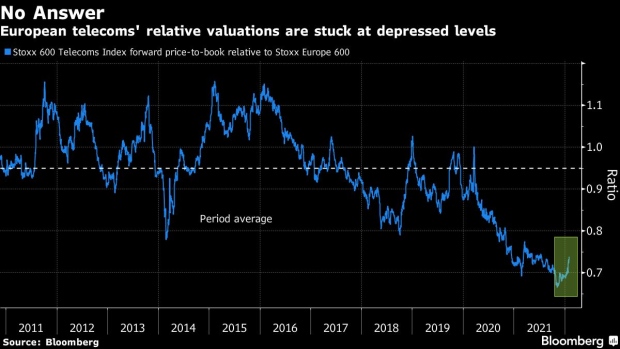 In what is the worst week for European stocks in two months, a perennially underperforming sector is proving the biggest source of cheer.

While the Stoxx 600 Index is down more than 2% over the past five days, its telecommunications subindex has risen 2.5%. With the sector among the cheapest around, that may not be so surprising at a time when investors are seeking value over growth. But there’s another reason: Industry consolidation and the likelihood of more.

Vodafone Group Plc has been at the center of speculation this week amid reports about two possible deals, while Bloomberg reported that Deutsche Telekom AG is weighing a potential merger of its mobile towers with those of rivals including Vodafone and Orange SA.

Investors are starting to rethink their pessimistic view of once unloved telecommunications stocks. Morgan Stanley strategists just double upgraded the sector to overweight from underweight, saying shares have low valuations and are the most under-owned in the market. They also note the potential return of consolidation among European carriers.

According to a poll conducted by Citi, investors identify the U.K. and Spain as the most likely regions to see telecoms consolidation.