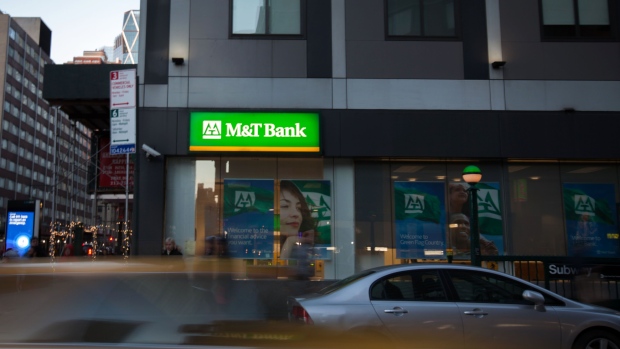 M&T Bank Corp. agreed to buy People’s United Financial Inc. in an all-stock deal valued at about US$7.6 billion, joining a string of U.S. regional banks bulking up in recent months to fend off competition from industry giants.

M&T Chief Executive Officer Rene Jones will lead the combined company, which will have about US$200 billion in assets and a network of more than 1,100 branches spanning 12 states from Maine to Virginia, M&T said Monday in a statement.

“The banking environment is very competitive, and we’re trying to figure out how we can get the necessary scale across things like technology, marketing, and at the same time really continue to make improvements,” Jones said in an interview after the acquisition was announced. “That takes a fair amount of investment.”

The tie-up between Buffalo, New York-based M&T and People’s United marks the latest deal among regional banks as they seek size to counter low interest rates, tepid loan demand and the need for greater technology spending. The mergers are aimed at helping smaller firms compete against giants such as JPMorgan Chase & Co., which is moving into new states and spending billions annually on digital offerings.

U.S. lenders approaching an asset size of US$250 billion are subject to greater regulatory scrutiny, another reason to combine in order to spread compliance costs.

M&T’s purchase immediately increases the company’s tangible book value, or the value of assets that shareholders would receive in liquidation, by 0.4 per cent, according to Herman Chan, a Bloomberg Intelligence analyst. That makes it cheaper than Huntington Bancshares’ purchase of TCF, which would dilute the metric by 7 per cent.

People’s United investors will receive 0.118 of a share of M&T common stock for each of their shares, according to the statement. The transaction is expected to be completed in the fourth quarter.

The deal will be 10 per cent to 12 per cent accretive to earnings per share in 2023, reflecting estimated annual cost savings of about US$330 million, the company said.

M&T shares advanced 18 per cent this year, giving the bank a US$19.3 billion market value. People’s United jumped 35 per cent, valuing the company at US$7.4 billion. Both stocks outperformed the 9.8 per cent gain in the S&P 500 Financials Index.