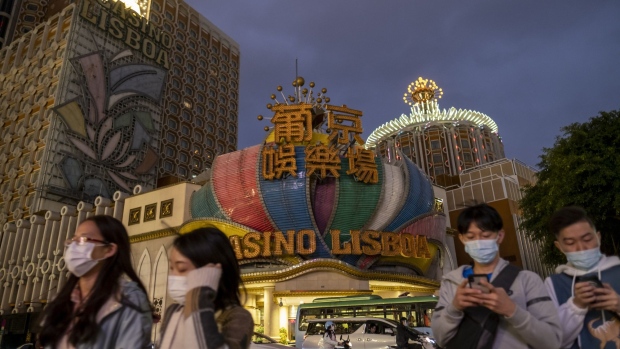 Pedestrians wearing face masks pass the Casino Lisboa, operated by SJM Holdings Ltd., after its lights were switched off at dusk in Macau, China, on Wednesday, Feb. 5, 2020. Casinos in Macau, the Chinese territory that's the world's biggest gambling hub, closed for 15 days as China tries to contain the spread of the deadly coronavirus. Photographer: Justin Chin/Bloomberg , Bloomberg

Officials in the region, the only place in China where casino gambling is legal, said they would begin a 45-day public consultation period on Sept. 15 to discuss the new licensing. Among the topics being covered: how many concessions will be allowed, how long their terms will be, and the level of supervision by the government.

“We think this announcement would have already planted a seed of doubt in investors’ minds, which is probably enough to de-rate these names until clarity emerges on key points,” he wrote in the research note Wednesday.

Macau, the world’s largest casino market, has been hard hit by the pandemic, which prompted the government to restrict travel. Renewal discussions for the concessions had been expected for some time, but the comments from the local finance and casino authorities raise the specter of more regulation in a country that already has seen tighter control of businesses from movie production to video games.

Among the items officials discussed in a press conference Tuesday were tighter controls on the distribution of dividends, greater participation by locals in the concessions and government representatives directly overseeing the businesses, Kim noted.

Jason Ader, the chief executive officer of New York-based investment manager SpringOwl Asset Management and a former Las Vegas Sands Corp. board member, said he thought casinos operators will likely see the restrictions being proposed as not so bad. He said it was unlikely an operator like Sands would lose its license, although the overall climate for foreign companies in the country isn’t great.

“It’s sort of all going in the wrong direction in China,” Ader said. “The casino issues are a continuation of what’s been a pretty big crackdown.”