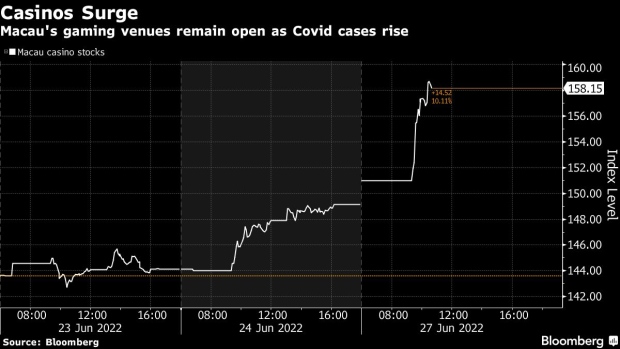 (Bloomberg) -- Macau is conducting a third round of citywide testing after virus cases almost doubled over the weekend, ramping up pressure on the world’s largest gaming hub to control the record outbreak and keep its casinos open.

The city reported 96 infections on Sunday, taking the total in the outbreak that started June 18 to 357, according to the government. Authorities are testing the entire city of about 680,000 people on Monday and Tuesday, and have already ordered the closure of public departments and venues including bars, nightclubs, cinemas, gyms and hair salons. Dining-in at restaurants has also been suspended.

Casinos remain open. But anyone who enters must present a negative nucleic-acid test result obtained within 48 hours as well as take a rapid-antigen test that day. The city hasn’t shut casinos since a 15-day closure in February 2020 and Chief Executive Ho Iat Seng said last week that officials will only close individual venues if Covid patients are found to have entered the gaming areas during a specific period. The gaming sector employees the bulk of the local workforce, putting pressure on officials to avoid a shutdown.

A Bloomberg gauge of casino stocks rose more than 6% on Monday, outpacing the advance in the Hang Seng Index.

Despite the increase in Covid cases in Macau, the possibility that President Xi Jinping may visit Hong Kong “is bringing excitement to the market for a possible gift, for example, further relaxation of travel restrictions,” said Bloomberg Intelligence analyst Angela Hanlee. “A steady progress of license renewal is also positive for the sector.”

The outbreak has already spilled over to the neighboring mainland city of Zhuhai, which has locked down areas near the border and required quarantine for visitors from the gambling enclave.

Macau’s repeated rounds of mass testing to weed out transmission as early as possible are typical of mainland China’s Covid Zero playbook. But its reluctance to shut casinos contrasts with the strict and extensive lockdowns deployed in mainland cities like Shanghai.

Macau has been struggling with a dearth of tourists that’s taken an enormous toll on casinos’ revenue. And beyond the virus, the gaming industry, which contributes to 80% of the government income, is facing other challenges including a new law that significantly increases government control over operations and Beijing’s crackdown on high-rolling gamblers to curb capital outflow.