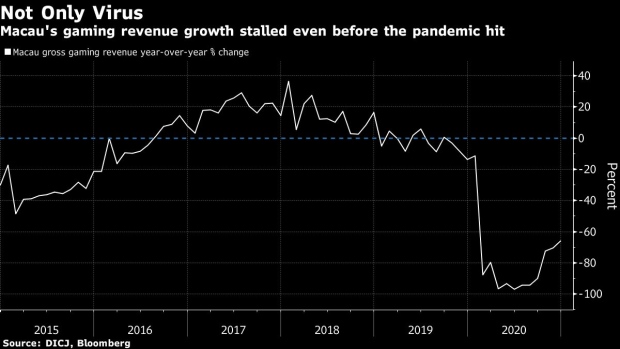 (Bloomberg) -- When investors started calling early Wednesday morning after China moved to tighten its grip on the world’s biggest gambling hub, the junket operator had just one thing to say: sell.

“There is no hope in Macau,” the executive said in an interview, declining to be named on concern there could be fallout for their business, which facilitates loans for bettors in Macau.

“Strengthening regulation in operations has been scaring away gamblers in the last few years,” the veteran industry insider said. “Now the greater intervention of the government into casinos’ operations and financial arrangements will also further scare away investors.”

And sell they did, with the Bloomberg Intelligence index of the six casino operators in the gambling enclave plummeting 23% Wednesday, the biggest slide since its inception in 2005, and Sands China Ltd. alone hemorrhaging $8.4 billion in market value.

Coming after Covid-19 brought the city to a standstill -- and years of slowing growth before that as casinos were impacted by Hong Kong’s protests and a clampdown on overseas gambling and money outflows -- the new moves threaten to fundamentally transform Macau’s identity as the epicenter of global gaming.

Besides appointing government representatives to “supervise” companies, the authorities want to boost local shareholdings in casino operators, according to a document up for public consultation. Another proposed rule says that companies will need “official approval” before distributing profits such as dividends. While few details were provided in Tuesday’s announcement, the overall approach indicates a level of scrutiny -- and, potentially interference -- not previously seen in Macau, already subject to years-long clampdowns on money laundering and illicit currency flows.

“Macau is already experiencing a challenging period where its top two biggest markets -- the mainland and Hong Kong -- are already constrained in terms of permitted travel,” said Ben Lee, a Macau-based managing partner at gambling consultancy IGamiX. “Add to that the recent crackdown on gambling as well as money channeling, one could easily draw the conclusion that the size of the market going forward will likely remain tightly controlled.”

The only place in the world’s second-largest economy where casinos are allowed, Chinese punters have fueled Macau’s gaming sector to six times the size of Las Vegas. The industry accounts for up to 80% of the government’s tax income and 55.5% of the city’s GDP.

The casinos themselves didn’t comment, seemingly still trying to get their heads around the regulation. An executive at Melco Resorts and Entertainment, whose casinos and hotels are popular with premium gamblers, said it was too new and that the company lacked clarity on what it would mean for its business. They declined to be identified as they’re not authorized to speak to the media. Melco slipped 5.9% in the U.S. Tuesday.

Others struck a note of caution as shares sold off. SJM Holdings Ltd., one of Macau’s pioneers, doesn’t see much change from the current rules, according to a person familiar with their operations. They pointed out that a government body -- Macau’s Gaming Inspection and Coordination Bureau -- already oversees the casinos. Still, SJM tumbled 24% in Hong Kong, the most since 2011.

Some played down the proposed revisions, with Sanford C. Bernstein analyst Vitaly Umansky writing in a note Wednesday that revisions to Macau’s gaming law are “largely progressing as we had anticipated.”

Casino operators had already been expecting additional oversight in the boardroom, Umansky said. More scrutiny on profit distribution may not seek to limit shareholder benefits but to make sure proper investment is being made in Macau, he wrote.

Nevertheless, diversifying the city’s economy away from gambling has been an open goal of Beijing’s for years. The Chinese government recently announced that the island of Hengqin, part of nearby Guangdong province, would be “co-developed” by Macau to give its economy more space to expand. Tuesday’s moves could accelerate that trend, with the threat of even more surveillance pushing some, particularly the junket players, to exit the business.

Specter of Cashless Gambling Drives Junkets Away From Macau

The new rules could go even further and effectively turn the casino companies into Chinese state-owned entities, a smaller junket operator fretted. The executive didn’t want to be identified, concerned about the ramifications for their business.

Macau’s gaming regulator did not immediately reply to a request for comment and for further detail on the oversight being proposed.

China’s previous moves have focused on curtailing big-spending mainland punters and junkets in an effort to discourage gambling, which the Communist Party disapproves of. But under the heightened oversight, Macau’s VIP business -- which accounted for 46% of gross gaming revenue in 2019 -- could face an even bleaker future, the analyst Lee said.

The pandemic saw Macau’s gaming revenues plunge almost 80% last year from 2019 to 60 billion patacas ($7.5 billion). In the first eight months of 2021, takings recovered only slightly to 69% of pre-pandemic levels. Casino operators have been raising billions of dollars in funds and seeking to ease loan conditions to keep operations going.

Macau was already on the ropes, and this could make things worse.

“We’ve suffered a terrible business situation during Covid and the government asked us not to cut any employees, increasing our burden,” said the junket executive advising investors to sell. “Our business focus will continue to shift away from Macau.”