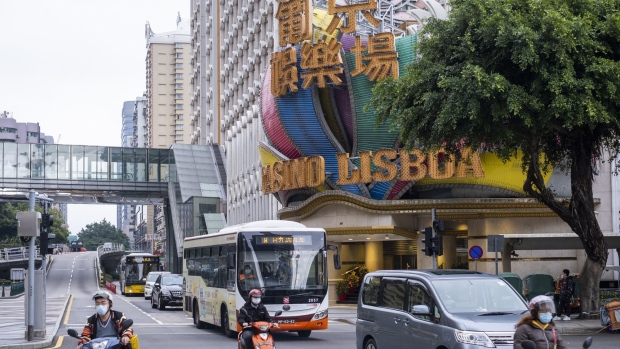 Traffic travel past the Casino Lisboa, operated by SJM Holdings Ltd., in Macau, China, on Wednesday, Feb. 5, 2020. Casinos in Macau, the Chinese territory that's the world's biggest gambling hub, closed for 15 days as China tries to contain the spread of the deadly coronavirus. , Coco Liu

(Bloomberg) -- Macau casino stocks surged the most in six months after the city announced plans to welcome back tour groups from mainland China as soon as November, a breakthrough for the gaming hub’s Covid-hammered, tourism-dependent economy.

Wynn Resorts Ltd. soared as much 15% Monday to $68.89 in New York, the biggest intraday gain since November. Las Vegas Sands Corp. jumped 14% to $40.50, the biggest advance since May. Both stocks led the S&P 500 index. Shares of MGM Resorts International were up as much as 5%.

Macau’s neighboring mainland province of Guangdong will first resume group tours to the enclave, and then the policy will expand to Shanghai, Zhejiang, Jiangsu and Fujian, Macau region Chief Executive Ho Iat Seng said at a press conference Saturday. He hoped daily visitation could reach 40,000 after the travel easing is implemented, compared with under 11,000 in August.

In addition to welcoming back tour groups for the first time in almost three years, China will resume issuing e-visas for people visiting Macau by early November, he said. That would make it easier for travelers to obtain permits to enter the city, which currently requires a pre-booked in-person appointment at immigration office counters and an approval period of about a week.

The changes provide Macau with a tentative path toward recovery. The once-bustling gambling hub has taken a heavy blow from Covid Zero policies in the mainland, where most of the city’s tourists come from, with gaming revenue slumping since March amid repeated lockdowns and tougher visa restrictions that kept visitors away.

The plunge in tourism has rippled through other sectors, such as suppliers of slot machines, baccarat table systems and other casino equipment. They moved out to more welcoming markets such as Singapore and the Philippines.

“Finally, we feel we can talk about a return to normalcy,” JPMorgan Chase & Co. analyst DS Kim wrote in a note Sunday. “The resumption of e-visa and group tours should alleviate friction for a Macau trip, as well as signal to many that it’s OK to visit Macau, in turn boosting demand into the year-end holidays and 2023.”

Still, Macau faces substantial headwinds that are likely to stymie its rebound. Mainland China continues to impose Covid lockdowns, even for a small number of infections, which is hurting domestic travel demand. Macau has made clear it will continue to align itself with Covid Zero, meaning the specter of movement restrictions also hangs over the gambling hub if local infections crop up.

More broadly, Beijing is tightening control over the traveling of frequent gamblers, which the e-visa change won’t help, Credit Suisse analysts including Kenneth Fong wrote in a note Monday. Packaged tour visitors are also generally lower-spending players, and there’s also the risk of another round of casino closures if Covid cases spike again, he said.