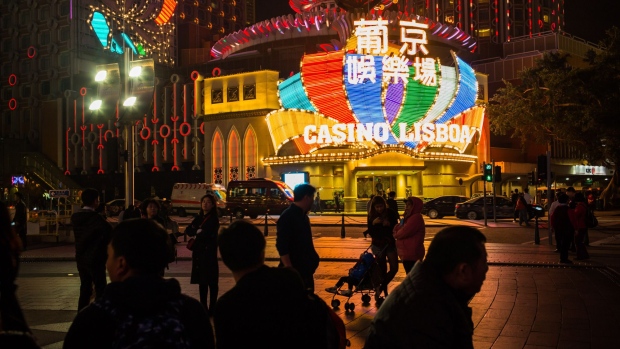 Buses wait at a traffic signal light next to Casino Grand Lisboa, operated by SJM Holdings Ltd., at night in Macau, China, on Tuesday, Feb. 4, 2020. Casinos in Macau, the Chinese territory that's the worlds biggest gambling hub, will close for 15 days as China tries to contain the spread of the deadly coronavirus. , Bloomberg

(Bloomberg) -- Macau shut SJM Holdings Ltd.’s Grand Lisboa, the first closure of a gaming venue in more than two years, as the city struggles to contain its worst ever virus outbreak.

The shutdown started Tuesday and is expected to last until July 11, and comes after authorities found 13 infections linked to the gaming resort. Officials have also locked down one floor of the ‘Shoppes at Four Seasons’, a shopping center at Sands China Ltd.’s Plaza Macao, after another cluster was found there, though the rest of the resort remains open for now.

SJM shares fell 0.6% in Hong Kong on Wednesday. A Bloomberg Intelligence gauge of casino stocks extended losses and is down 16% this year.

It’s the first time Macau has shut a casino since an unprecedented 15-day shutdown of all venues in February 2020, and follows the closure of bars to cinemas and public venues late last month. The city is conducting multiple rounds of mass testing to try and weed out hidden chains of community transmission, with authorities locking down buildings across the city when cases are found in more than one apartment.

Macau reported 89 local infections for Monday, plus two imported cases, bringing the total for the outbreak that started on June 18 to 951.

While small by global standards, the flareup follows months of virus-free life for Macau and raises the specter of more disruptions to come. It also deals a substantial economic blow to the city that was already grappling with a dearth of tourists and slumping gaming revenue as mainland China’s Covid Zero policies discourage travel to the enclave, with casinos burning through millions of dollars each day they stay open.

Macau remains quarantine-free for travelers from low-risk areas in mainland China, the largest source of its tourism, while a 10-day quarantine is required for those who enter from Hong Kong, Taiwan, Portugal and some high-risk mainland regions. It is otherwise shut to the rest of the world.

The neighboring mainland city of Zhuhai tightened its border restrictions for visitors from Macau, requiring seven days of quarantine at designated facilities and another seven days of self-health monitoring. Before the outbreak, arrivals didn’t have to undergo any isolation.