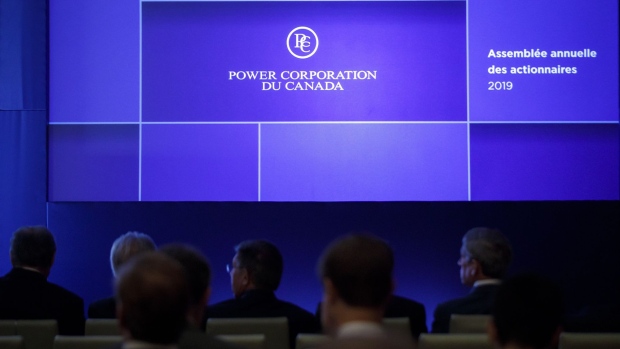 Signage is displayed on a screen during the Power Corp. of Canada (PCC) annual general meeting in Toronto, Ontario, Canada, on Tuesday, May 14, 2019. PCC, the second-largest company in the U.S. 401(k) pension business, plans to keep buying companies that fit with its strategy. Photographer: Cole Burston/Bloomberg , Bloomberg

IGM Financial Inc.’s Mackenzie Investments unit has launched a new fund to sell private credit to retail investors, a move that aims to capitalize on one of its recent acquisitions.

The fund is meant to give retail investors a way to benefit from direct-lending transactions, which often offer higher yields with lower default and loss rates, said Michael Schnitman, Mackenzie’s head of alternative investments. The fund helps investors diversify by letting them access private companies, he said. In return, holders give up some liquidity compared with traditional retail funds.

The fund is Mackenzie’s first collaboration with Northleaf, in which the mutual fund firm and Great-West Lifeco Inc. bought a 49.9 per cent voting stake last year for $245 million (US$194 million). Toronto-based Northleaf is a private-markets investment firm with US$15 billion in committed capital.

Winnipeg, Manitoba-basedIGM Financial, which reported $243.5 billion in assets under management and advisement as of Feb. 28, is controlled by Power Corp. of Canada.