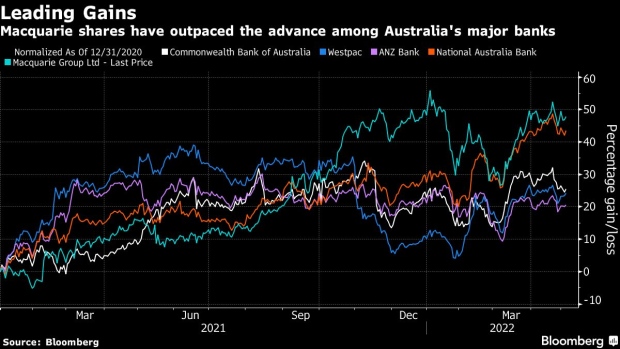 Net income for the year to March 31 rose to A$4.71 billion ($3.35 billion), compared with A$3 billion a year earlier, the company said in a statement Friday. That beat the A$4.22 billion estimate of seven analysts surveyed by Bloomberg.

“We continue to maintain a cautious stance, with a conservative approach to capital, funding and liquidity that positions us well to respond to the current environment,” Chief Executive Officer Shemara Wikramanayake said in the statement.

Meantime, the firm will pay a final dividend of A$3.50 per share, while assets under management grew 37% to A$774.8 billion.

CEO Wikramanayake took home A$25.8 million, while Nick O’Kane, the head of commodities and global markets, received A$36.2 million.

“Macquarie’s record fiscal 2022 profit of A$4.7 billion, up 56% vs. 2021, may be tough to beat next year. Volatility due to the war in Ukraine, big jumps in bond yields and booming commodity prices seem unlikely to perist” -- Senior industry analyst Matt Ingram. Read the report here.