Emmanuel Macron defeated far-right leader Marine Le Pen in the French presidential election on a pro-business, pro-European Union platform, bolstering the bloc in the midst of its worst security crisis in decades.

With counting still under way, projections by France’s five main pollsters put Macron on course to win about 58 per cent of the vote in Sunday’s runoff compared with 42 per cent for Le Pen. The euro rose after the nationalist leader conceded defeat in a speech to her supporters in Paris.

The 44-year-old Macron becomes the first incumbent to win a second term since Jacques Chirac two decades ago. With campaigning shaped by the war in Ukraine, his pledge to make France a cornerstone of a stronger, more integrated EU won out over the nativism and protectionism championed by Le Pen.

The outcome is good news for investors who had predicted that a Le Pen victory would deliver a shock to markets on the scale of the U.K.’s vote to leave the EU or the election of Donald Trump in the U.S. The euro opened up 0.5 per cent against the dollar to 1.0844 in early Sydney trading.

Yet the margin of victory is far narrower than last time, when Macron beat Le Pen by more than 30 points. The rise in support for her nationalist program reflects a bitterly divided country. Macron sought to reach out to his opponents in his victory speech, urging his supporters not to boo his rival.

“I am no longer the candidate for one side, I am the president for everyone,” he said at a rally beneath the Eiffel Tower in the center of the French capital. He acknowledged that many people had voted for him simply to stop the advance of the far-right, rather than because they backed his ideas.

Attention is already turning to the legislative elections planned for June, when Macron will be defending the parliamentary majority he needs to push through his program. The results puts the president in a relatively strong position, though he will probably need to form alliances with other parties and Le Pen urged her supporters to continue their campaigning ahead of that vote.

“The result in itself represents a stunning victory,” Le Pen said, before leading her supporters in a chorus of the national anthem. “Millions of people voted for the national camp and for change.”

Macron’s challenge over the next five years will be to heal the rifts in the country and muster support for his plans to make the country more competitive by overhauling social policies such as pensions and improving the country’s economic fundamentals.

That won’t be easy. France has one of the sharpest urban-rural cleavages in Europe and Macron’s first term was marked by complaints that he gave affluent city dwellers preferential treatment. That fury exploded during protests against his pension reform and economic inequality. A spate of terrorist attacks added to the sense of insecurity and rekindled debate on what it means to be French.

With the traditional parties of the left and right in disarray, 53-year-old Le Pen was the main beneficiary, along with far-left leader Jean-Luc Melenchon who narrowly missed qualifying for the runoff vote. On Friday, the last day of campaigning, Macron pledged to do more to address the grievances of poorer voters to reverse the steady increase in support for Le Pen.

“She feeds on the things we haven’t managed to do,” Macron said, “things that I haven’t succeeded in doing myself, namely quelling a certain anger, responding to demands quickly enough, and in particular, succeeding in giving the prospect of progress and security to the French middle and working classes.” 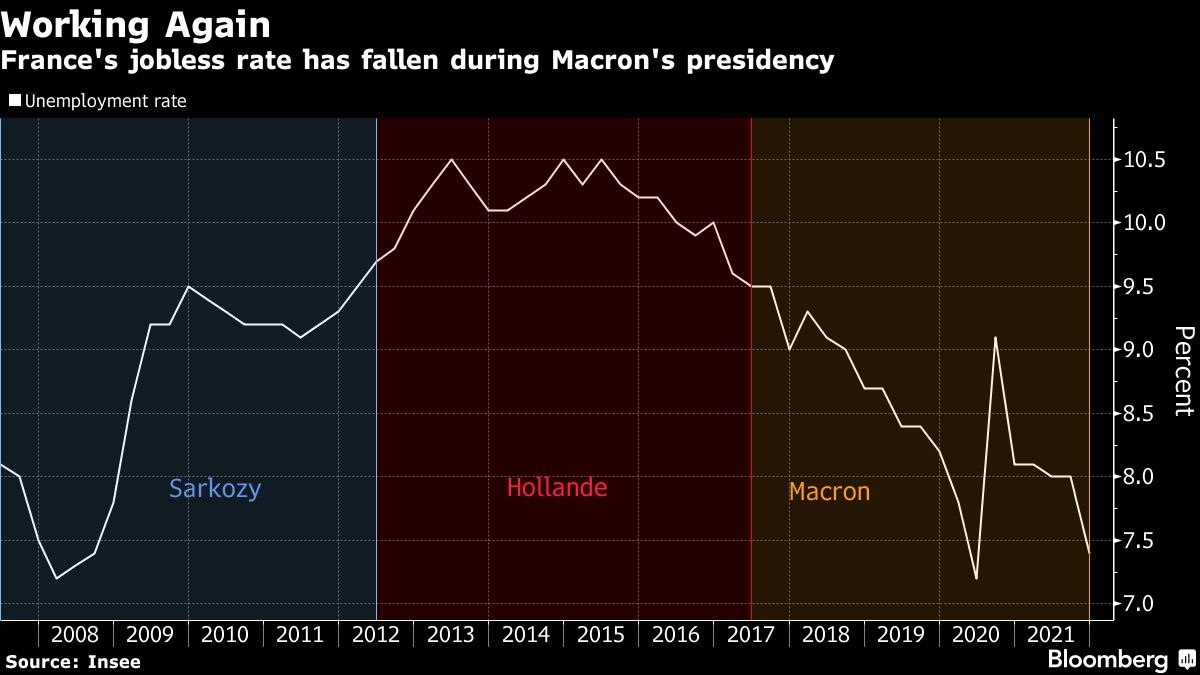 France’s European allies will also be relieved by the result.

While Le Pen said she no longer wants to abandon the euro or pull France out of the EU, she argued for transforming it into a looser alliance of nations, with French and not European law supreme. That would fundamentally undermine the way the bloc works.

She also advocates withdrawing from NATO’s command structure and creating a pact with the Kremlin once the guns in Ukraine fall silent.

German, Spanish and Portuguese leaders took the unusual step of wading into the domestic affairs of another country by calling on French voters not to support her in a joint column published in several newspapers on April 21. They described her as the candidate “who openly sides with those who attack our freedom and democracy.”

German Chancellor Olaf Scholz, the first foreign leader to speak to Macron following his victory, said in a Tweet that Macron’s victory showed a strong commitment to Europe. “I am pleased that we will be continuing our good cooperation,” he said, adding that they will meet in person as soon as possible.

Le Pen’s focus on pocketbook issues did resonate with many voters. As she crisscrossed France on the campaign trail, she cast herself as a sort of modern day Robin Hood at the service of people struggling with energy and food prices driven higher by the Ukraine crisis. The gap to Macron was as little as two percentage points around the time of the first round on April 10. But that was not enough once Macron turned his full attention from the war to the election.

When Macron became the youngest-ever elected French head of state in 2017, he was seen as a breath of fresh air and a bulwark against the rising tide of illiberal populism. But admiration turned to resentment. The former investment banker educated at France’s most elite institutions struggled to connect with less well-off voters. He earned a reputation for aloofness and arrogance, and became known as “president of the rich.”

To be sure, Macron did win approval for his handling of the pandemic. The French economy is recovering faster than major European peers and he has so far shielded families and businesses from the worst of the inflation shock.

But Macron himself has acknowledged that he failed to fully deliver on his bold early promises and has tried to strike a more humble tone.