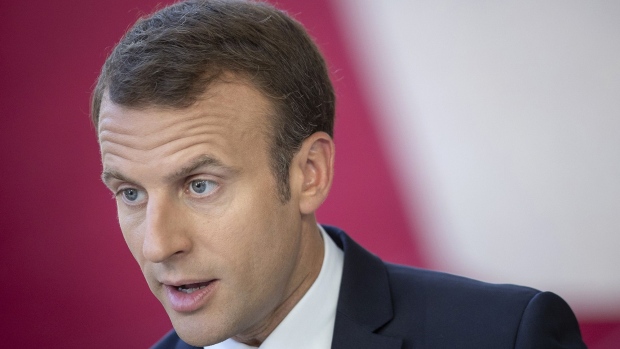 French President Emmanuel Macron imposed a new nationwide lockdown for the next month, clamping down on movement as the rapid spread of the coronavirus overwhelms health services.

The lockdown, which will start on Friday, comes less than a week after France expanded a curfew to about two thirds of the population in a bid to regain control of the pandemic. Infections and hospitalizations are rising at such a pace that avoiding tighter measures is no longer possible, according to health-care officials.

“The virus is circulating in France at a speed that even the most pessimistic forecast didn’t foresee,” Macron said in an address televised nationally on Wednesday evening. “The measures we’ve taken have turned out to be insufficient to counter a wave that’s affecting all Europe.”

France’s stay-at-home order is part of a series of tighter restrictions across Europe, where more than 210,000 people have died from the disease and nearly 6.5 million have been infected -- Germany, the U.K., Italy, Spain and Greece reported record daily increases in cases on Wednesday.

German Chancellor Angela Merkel imposed a one-month partial shutdown starting Monday, the toughest restrictions in the country since the end of a lockdown in the spring. Ireland already moved to shutter its economy for six weeks.

European leaders have been forced to relent and revive strict curbs, which hammered economies in the second quarter, as contagion rates soar and hospitals come under strain.

France needs a “brutal brake on infections,” Macron said, adding that the country could have 400,000 deaths in months if nothing is done. He said intensive-care facilities will have 9,000 patients -- close to capacity -- by mid-November, based on current trends.

The French leader opened the prospect of easing some curbs if there’s an improvement in two weeks. The goal of the measures is to lower daily cases to 5,000 -- a far cry from current rates.

French authorities last week reported four consecutive days of record infections, including more than 52,000 on Sunday. COVID-19 cases in the country are now averaging more than 39,000 a day, with the weekly pace climbing for the past 26 days.

Fatalities from the disease have jumped this week, with French health authorities on Tuesday reporting the deadliest day since April 22. The seven-day average of deaths has increased to 248, the highest level since early May.

“In view of what’s going on in hospitals, we have no room for error,” Remi Salomon, head of the medical committee at Paris hospital operator AP-HP, said on Europe 1 radio before Macron’s announcement. “We can’t try something else and say, we’ll wait two or three weeks to see whether it works or not.”

From Friday until at least Dec. 1:

The new measures won’t likely bring immediate relief. Cases confirmed today could translate into hospitalizations in the next two to three weeks. After the first lockdown on March 17, the number of patients hospitalized kept climbing for almost a month, before ebbing slowly.

“The options discussed by government so far could strip 0.8-2% off fourth quarter GDP if they stay in place for a month. This is in addition to the 1.1% contraction we are already forecasting for 4Q.”

Patients in hospitals and occupying intensive-care beds are already multiple times higher than at the start of the first lockdown. Hospitalizations stood at close to 19,000 on Tuesday, compared with just over 2,500 on March 17, according to data from health authorities. Close to 3,000 patients are in intensive-care units, compared with about 700 on the eve of the spring shutdown.

While France is increasing intensive-care capacity, it’s not enough to handle the spread of the disease, Macron said.

“A colossal effort was made with training and investment but it does not suffice to face this wave,” he said. “There’s no magical solution. We can’t build a different capacity in a few months.”

--With assistance from James Regan.