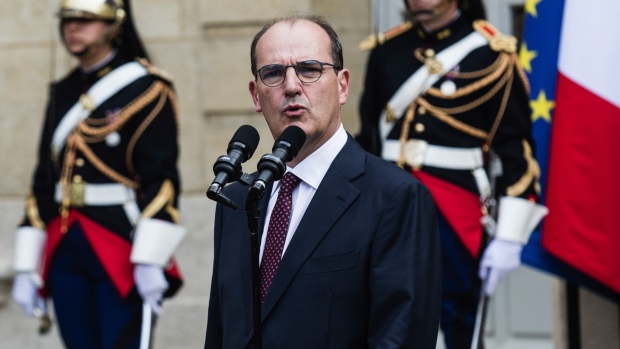 (Bloomberg) -- In appointing a relatively unknown figure to be his new head of government, Emmanuel Macron is sending out a clear message: his solution to turning around the flagging presidency is more Macron.

The mayor of a small southern French town, 55-year-old Jean Castex only started to make a name for himself earlier this year when he was appointed to oversee the national plan for lifting the coronavirus lockdown. His appointment to replace Edouard Philippe as prime minister on Friday came somewhat left of field.

“It’s a sign that Macron wants to go at it alone over the next two years, and doesn’t want to power-share with anyone,” said Catherine Fieschi, a political researcher who heads Counterpoint, a consultancy on social and cultural dynamics.

With the popular Philippe out of the way, Macron can now focus on trying to stem the economic fallout from the coronavirus crisis, while pressing on with his widely unpopular overhaul of the pension system and keeping his pledge to inject more money into public hospitals. Castex as head of government should make that job a bit easier.

He’s a conservative politician who followed a similar path to Macron, having graduated from the elite national school of public administration and held the post of deputy secretary-general of the Elysee -- under former President Nicolas Sarkozy. In an early display of loyalty, Castex has already left the right-wing Republicans party.

And where Philippe was fiscally conservative, suggesting in a recent interview that he’d stick to his red lines and not give in to Macron on spending, Castex is known to be flexible. As Fieschi put it, “he’s not so much a man of ideology as a practical, hands-on type of guy.”

Castex may also help with another thorn in Macron’s side: the Yellow Vests, the grass roots movement sparked by a fuel tax that morphed into a nationwide phenomenon and turned violent at its peak. For while Castex is part and parcel of the Parisian elite, he’s been the mayor since 2008 of Prades, in the far-flung Pyrenees-Orientales region, providing Macron with some provincial clout.

As he assumed his new role, Castex spoke of unity and solidarity during a televised speech, in a southern French accent not often heard in the upper echelons of French politics.

“The health crisis is over, but the economic and social crisis is already here, the priorities will then need to change, methods will need to be adapted.” he said. “More than ever, we’ll need to reunite the nation to fight the upcoming crisis so that, in the continuity of the reforms you took over, we’ll come out stronger and with more solidarity.”

He praised what he called “Edouard Philippe’s style,” his “elegance” and his “immense talent.”

Later, in an interview on TF1 television, Castex said he wasn’t seeking the limelight, but “results with the recovery plan we are preparing.”

Macron’s decision to change his government came after he suffered a massive defeat in local elections on Sunday, with the Greens sweeping big cities and conservative and socialist mayors holding on to their seats. But those hoping that Castex’s appointment means Macron will now focus more on social and green policies -- as he’s been signaling he would for some time -- may be disappointed.

“I regret this isn’t a pro-ecology minister,” ecologist member of parliament Francois-Michel Lambert said on Twitter. “The signal sent by voters wasn’t heard.”

Macron, who was elected on a centrist program and was once close to the socialist party, understands clearly that his support base has shifted to the right, according to Fieschi. “He had an opportunity to tack left, and in fact he’s tacking right,” she said.

The conservative opposition quickly understood the threat, with Republicans lawmaker Eric Ciotti criticizing in a tweet what he called a shift by Macron “toward a totally personal and authoritarian power” that bypasses the premiership.

Mujtaba Rahman, who oversees European analysis at Eurasia Group, said he expects Castex to act as “the manager and de facto chief of staff while Macron takes direct control of government in a lightening attempt to create a new record which he can present to the electorate in 2022.”

But in sidelining Philippe, Macron might have created a powerful opponent.

He may have committed to help the president prepare the 2022 election, according to AFP, but Philippe is now well placed to be a potential contender. His stern yet down-to-earth response to the coronavirus outbreak resonated more than Macron’s with the French -- though he faces a judicial probe into the government’s handling of the crisis -- and it was he who scored one of the rare wins for Macron’s camp in the municipal vote, when he was elected mayor of Le Havre.

Being less popular than Philippe means Castex could be ditched should Macron need to deflect criticism before 2022, and amid an upcoming economic crisis.

At the end of his emotional speech during the handover ceremony, Philippe had one piece of advice for his successor. “Be good,” he said. “And as we say, farewell!”