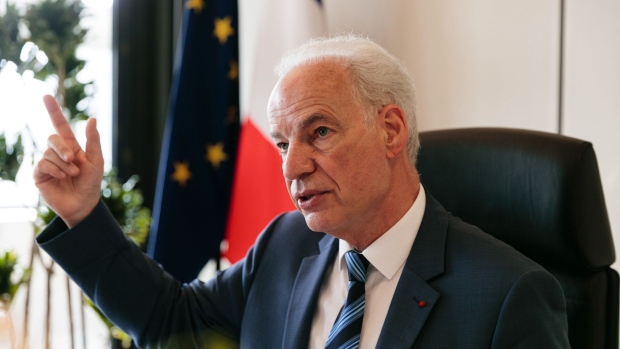 (Bloomberg) -- One of French President Emmanuel Macron’s ministers resigned after he was convicted for failing to properly declare his wealth before taking up his post.

Alain Griset said in a statement Wednesday he was resigning as minister for small and medium-sized companies. His announcement came shortly after the Paris criminal court handed him a six-month suspended sentence, which he said he’s planning to appeal.

“The court considers that Alain Griset had a genuine intent to conceal” part of his assets, a Paris judge said earlier on Wednesday. Griset knew he should have declared a sum of more than 100,000 euros ($113,000), as he had done for money he owned on six other accounts, the judge said.

The resignation may spare Macron another legal embarrassment just a few months before the first round of France’s presidential election. Justice Minister Eric Dupond-Moretti was charged in July over allegations of conflicts of interest and there was public indignation when Gerald Darmanin was promoted interior minister even as he faced rape accusations.  Both men deny the allegations, and the case against Darmanin is slated to be dismissed by investigators.

None of the major French political parties have been spared by legal embarrassments in the past decade. Francois Hollande’s presidency was tarnished when his budget minister was found to be dodging taxes and nationalist leader Marine Le Pen has been charged for misusing European Union funds.