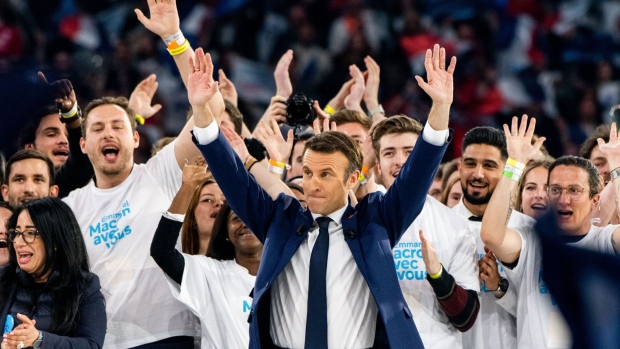 (Bloomberg) -- President Emmanuel Macron’s push for deeper European military integration was in tatters in early February when he pulled a French-led mission out of West Africa amid disputes with Germany and Italy.

The failure to contain extremists in the Sahel exposed the inability of the European Union’s biggest powers to muster either the political commitment or the resources to maintain order in their own backyard and spurred concerns in Brussels of a destabilizing influx of African refugees. Then Russia invaded Ukraine, and EU defense was suddenly a priority across the bloc.

Faced with the continent’s gravest security crisis since World War II, EU members started to find common ground on their future security priorities, including the creation of its first ever joint military force by 2025. The trouble for Macron is that while the European political cycle has swung in his favor, it’s not likely to help him that much at the ballot box this Sunday.

Macron’s popularity soared during the early days of the war, allowing him to cast himself as a safe pair of hands in turbulent times and Europe’s preeminent statesman. “We were the only ones back in 2017 to wave European flags,” he said at a recent rally. This week, though, he lost that edge to far-right leader Marine Le Pen who has been touring France to talk to voters about soaring energy and food prices.

The latest surveys show Macron would beat Le Pen by 53% to 47% in a runoff on April 24, but that six percentage-point gap, based on an average compiled by Bloomberg, has more than halved from a month ago. “Macron is keeping his base but that base is not expanding as much as it did when we were under the rally-behind-the-flag effect,” said Bernard Sananes, head of Elabe, a Paris-based pollster. “The real concern for the French is purchasing power, not the European Union.”

Macron can probably make do without adding to his core electorate — which mixes center-left and center-right pro-business and largely affluent urban voters — but a smaller margin of victory would deprive him of the solid mandate he needs to implement tough reforms.

Ever since they first went face-to-face in 2017, Macron has been trying to neutralize Le Pen’s appeal to blue collar workers by arguing that a stronger Europe should and can provide the protection they want. He says a more united bloc is the only way to decrease the region’s energy and security dependency and that countries are better prepared to tackle adversity when they embrace the EU.

“France is a great military power and it will continue to be like that thanks to Europe,” Macron told a crowd during a campaign stop in western France on Tuesday. “Our role, our defense, our protection, it is as Europeans that we will build that.”

Ukrainian President Volodymyr Zelenskiy’s near daily messages imploring allies to help repel Russian bombs and artillery shells and photographs of executed civilians helped revive a sense of purpose in the European project. The French president says the upheaval proves he was right all along.

One top French official said that Macron is a natural champion of European defense because Brexit made him the only leader in the region with nuclear capability. France also has the largest army in the EU, its soldiers have fought in Iraq, Syria and Afghanistan, as well as the Sahel, and the country is the world’s third largest weapons exporter.

Macron first outlined the case for a more assertive EU in a speech at the Sorbonne university within weeks of taking office. Over the years, he honed his message to take into account the views and concerns of different member states — while he once called NATO braindead, angering allies who see it as protection against Russian expansion, he now says a united defense should be seen as part of the military alliance, not a substitute or a competitor.

Even so, the president’s rivals say the push will likely fall short of concrete achievements, just like with the Coronavirus pandemic, which sparked ambitious talks on industrial sovereignty but hasn’t triggered massive changes in the way the economy operates.

“The war in Ukraine is waking up Europeans on defense, so much the better,” said Arnaud Danjean, a Member of the European Parliament with the PPE, the conservative People’s Party Group. “But this awakening does not automatically mean a strengthening of European defense.” He said there’s no readiness for a ‘Buy European’ act and points out that deeper integration is dependent on national defense budget decisions.

In Paris, officials privately acknowledge there are hurdles to overcome, citing Germany’s purchase of U.S.-made F-35 fighter jets instead of moving forward with plans for a EU-built aircraft.

They say the awakening isn’t all down to the war in Ukraine, but Trump’s election and the assertiveness of China as well. They also say that French setbacks played a role, including AUKUS, an enhanced military alliance between the U.S., the U.K. and Australia that led the government in Canberra to cancel a multi-billion submarine contract with France.

Signs were apparent at the summit in Versailles in March that Macron has had some success changing a perception among European leaders that France only cares about its interests and deals for its defense industry. There, EU countries agreed to step-up defense investment and send 500 million euros ($544 million) worth of weapons to Ukraine’s military, breaking a taboo on providing arms to a non-member state during conflict.

French efforts to exempt military expenses from EU rules limiting public deficit and debt is also being legitimized, according to the French official.

“What Macron wanted was to encourage a reflection on important subjects, on which the 27 countries of the EU mostly agree,” said Alexandra de Hoop Scheffer, director of the German Marshall Fund office in Paris. “The starting point for that is to think about the cost of dependencies.”

Macron’s team knows getting to the end point will take time. But Clement Beaune, junior minister for Europe,  says the revival of the EU project is in itself a triumph because “we’ve won the battle of ideas.” Results on Sunday will indicate how many French voters agree.