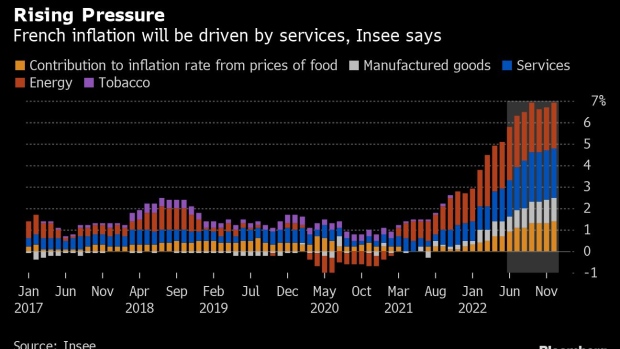 Customers shop at a vegetable stall in the Capucin Market in Bordeaux, France, on Friday, May 27, 2022. France's headline inflation is likely to accelerate to 5.6% in May from 5.4% in April, as food prices and road fuel costs increase, according to Bloomberg Economics' estimates. Photographer: Cyril Marcilhacy/Bloomberg , Bloomberg

French President Emmanuel Macron’s standout success in using public spending to tame rampant inflation is reaching its limits as a swelling debt burden and the loss of a governing majority curtails his ability to act.

Until now, France could boast the lowest inflation in the entire euro-area -- with the exception of island state Malta -- after 25 billion euros ($26 billion) in pre-election giveaways kept the rate in check. Macron’s so-called “tariff shield” aimed to protect consumers from surging oil and natural gas costs.

Yet rising prices are becoming harder to offset as they spread beyond energy to engulf food, goods and services. Meanwhile the government’s fiscal power is narrowing as rising borrowing costs mean public finances reach what Finance Minister Bruno Le Maire describes as an “alert level.”

Faster inflation in the euro area’s second-largest economy would add to the challenge facing the European Central Bank just as it starts raising interest rates. An intensifying cost-of-living squeeze would also further cloud France’s economic outlook, and threaten to revive grievances that sparked unrest during Macron’s first term with the so-called yellow-vest protests.

Consumer confidence has already dropped to a nine-year low, and French households have cut back spending. Last week, the government slashed its growth forecast for this year to 2.5% from 4%.

Macron is preparing to respond with parliamentary bills this month that would extend his tariff shield, protect consumer spending power and rewrite the 2022 budget. But after losing his parliamentary majority in elections last month, such plans face an uncertain future. He still needs the backing of some opposition lawmakers, and so far none have accepted coalition proposals.

“The question is whether they will be able to pass a law that will have a big impact going forward, even on energy inflation,” ING economist Charlotte de Montpellier said. “The incentive would be strong, but politics isn’t always what we think.”

Even if he succeeds in securing backing for new laws in the coming weeks, measures won’t be as effective to contain inflation this time round. While caps on electricity and gas costs kept prices down, the focus of the next dose of support will be more about putting money in consumers’ pockets, including an increase in state pensions, basic welfare benefits and public-sector salaries.

“Those measures are not so much likely to push inflation down,” Montpellier said. “They could actually postpone the time when inflation will start to go down.”

The French government currently expects 5% inflation on average this year, which implies the rate will continue to rise in coming months.

Statistics agency Insee sees it stabilizing between 6.5% and 7% from September, to the end of the year, with services -- which make up nearly 50% of outlays for households -- taking over from energy as the main driver of higher prices.

“Measures introduced by the government to cap household gas and electricity bills are the primary reason why French inflation has remained well below that recorded in the rest of the euro area. But as some of the sharp energy price gains seen in neighboring countries over the end of 2021 and the start of 2022 start falling out of the annual comparison, this will change. Even if the price caps remain in place, we expect France’s inflation to overtake the euro-area average from the start of next year.”

One element that may help keep prices in check in France and Europe is the relative financial strength of firms which were well protected during the Covid pandemic, Natixis economist Jesus Castillo said. If businesses can afford to raise salaries by taking a hit on margins rather than increasing prices, that could avoid an inflationary spiral.

“On average, firms are rather healthy and can absorb shocks,” Castillo said.

The French government has already started to lean on companies to take some of the burden, and said it will keep track of which are making the most effort and investigate food supply chains to identify any excessive margins.

Shipper CMA-CGM Group said that after consultation with the finance ministry, it will support efforts to protect households by cutting prices by 500 euros per container for some French customers. TotalEnergies is offering a summer discount for holidaymakers buying fuel at its highway service stations in France.

“The burden of inflation should be shared between public authorities and businesses benefiting from it,” Le Maire said last week. “The state has put a lot on the table, and I think we’re reaching the limit.”