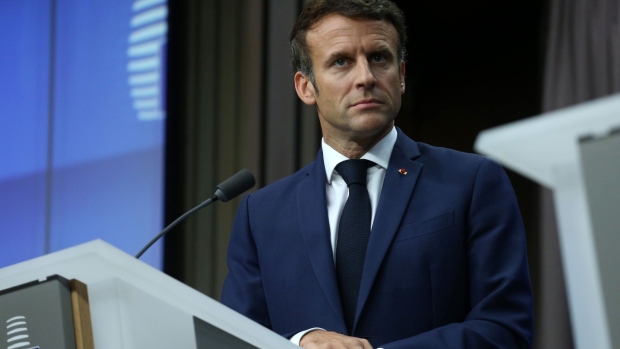 Emmanuel Macron, France's president, at a news conference following day two of the European Union (EU) leaders summit at the European Council headquarters in Brussels, Belgium, on Friday, June 24, 2022. European Union leaders are preparing for a further reduction in gas supplies from Russia, seeking ways to cushion the effects of the unprecedented crisis, as well as a surge in energy prices, on the region's economy. , Bloomberg

(Bloomberg) -- President Emmanuel Macron’s party will seek to enshrine the right to abortion in the French Constitution after several US states imposed an immediate ban following Friday’s Supreme Court’s ruling.

The party, which lost its outright majority in France’s National Assembly a week ago, is proposing a draft bill as soon as today, Aurore Berge, party head in the Assembly, said on France Inter radio Saturday.

Biden Allies in G-7 Aghast at US Abortion Rights Reversal

While abortion became legal in France after a law was enacted in 1975 following heated debate, women’s rights are always fragile and are regularly challenged, she said.

“For all women, for human’s rights, we must set this achievement in stone,” Prime Minister Elisabeth Borne said in a tweet. “The Parliament must be able to rally very strongly around this bill.”