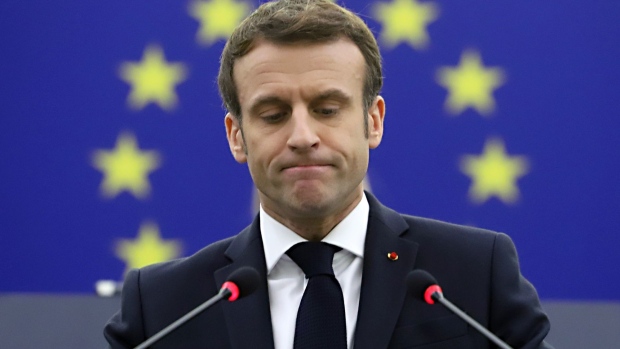 Emmanuel Macron, France's president, delivers the EU Presidency address in the hemicycle inside the Louise Weiss building, the principle seat of the European Parliament, in Strasbourg, France, on Wednesday, Jan. 19, 2022. European Union countries are skeptical that Macron will be able to use France’s six-month presidency of the bloc to jumpstart the implementation of a minimum corporate tax, adding to risks of delays to the broader global overhaul. , Bloomberg

(Bloomberg) -- President Emmanuel Macron said the only way for France to remain friends with the British government is if London respects its post-Brexit commitments.

Setting out the priorities of France’s six-month presidency of the European Union, Macron told European lawmakers in Strasbourg on Wednesday that Europe and the U.K. “must get back on the path of trust.” His comments come a week after U.K. and EU Brexit negotiators agreed to intensify talks on resolving differences over trade in Northern Ireland.

Macron said that pursuing a “common path after Brexit pre-supposes that the British government commits in good faith to respecting accords that have been reached with our Union.” He said this involves the post-Brexit agreement on Northern Ireland as well as fishing rights for French fishermen.

“Let us be clear and firm so that the commitments that have been undertaken are respected, it is the condition for being able to remain friends,” Macron said.

The U.K. and the EU agreed on Jan. 14 to intensify negotiations over the so-called Northern Ireland protocol, with Foreign Secretary Liz Truss leading the British side for the first time. Truss, who succeeded former Brexit chief David Frost in December, and European Commission Vice President Maros Sefcovic will meet again on Jan. 24.

The tone marked a positive shift after more confrontational meetings last year when the U.K. side was led by Frost. Negotiations have been at a virtual standstill for months with Truss warning that she is prepared to unilaterally override parts of the post-Brexit agreement on Northern Ireland if talks fail. Sefcovic said recently that the foundation of the entire deal between the U.K. and EU would be jeopardized if London did that.

Britain’s main complaint is that the protocol, which places an effective customs border down the Irish Sea to ensure no hard border on the the island of Ireland, disrupts trade between Northern Ireland and the rest of the U.K. The protocol was signed and agreed by the British government in 2019.