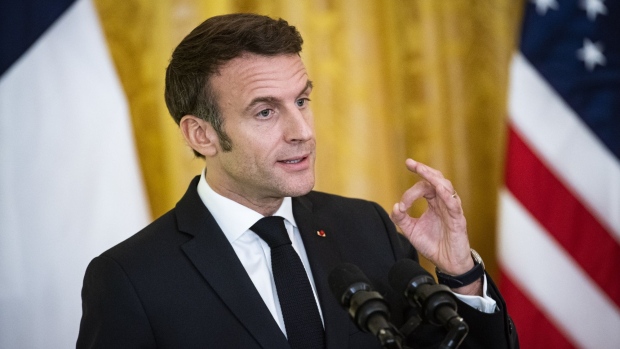 Emmanuel Macron, France's president, speaks at a news conference with US President Joe Biden, not pictured, in the East Room of the White House during a state visit in Washington, DC, US, on Thursday, Dec. 1, 2022. Biden is welcoming Macron for the first White House state dinner in more than three years, setting aside recent tensions with Paris over defense and trade issues to celebrate the oldest US alliance. , Bloomberg

(Bloomberg) -- French President Emmanuel Macron said he wants to resolve a dispute over industrial subsidies with the US “in the first quarter of 2023.”

Macron has joined other European Union leaders in criticizing the American Inflation Reduction Act, which they say provides an unfair advantage to North American electric-vehicle producers. The EU has said it may take the US to the World Trade Organization over the law.

“We need to find a way to solve these issues and we need to be able to invest much stronger and faster,” Macron told reporters in New Orleans on Friday, a day after he discussed the issue with President Joe Biden in Washington. He added that the goal of the EU is to get an exemption from the US law.

Biden said Thursday at a joint news conference with Macron that the law “was never intended to exclude folks who were cooperating with us” but that “the US makes no apology.” He added that he saw room for tweaks to “make it easier for European countries to participate.”

“It’s a major breakthrough to say: they’re our allies, they’re our friends, so even if we don’t have a trade deal with Europe we’re going to consider European components the same way as those from countries with a trade deal,” Reuters and the Financial Times quoted Le Maire as saying.

Le Maire said France didn’t have to threaten the US with an appeal to the World Trade Organization to ease tensions.

“Nobody wants a trade war in the situation we’re in,” Le Maire said. “We have one competitor called China. The strategic goal of the US, it seems to me, is not to weaken Europe but on the contrary to work in partnership with Europe.”