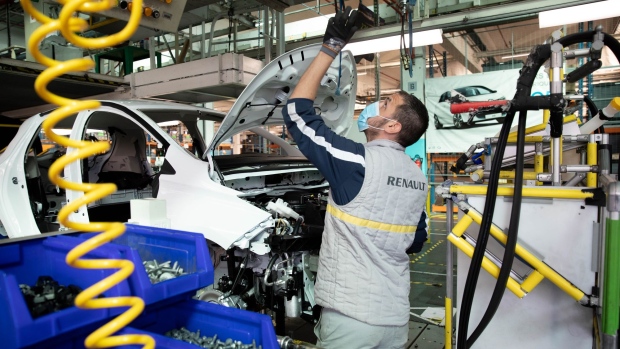 An employee wearing a protective face mask works on the Renault Zoe electric automobile assembly line at the Renault SA factory in Flins, France, on Wednesday, May 6, 2020. European car sales were almost wiped out in April after governments around the continent closed auto dealerships and other businesses to slow the spread of the coronavirus. Photographer: Christophe Morin/Bloomberg , Bloomberg

(Bloomberg) -- French President Emmanuel Macron is set to announce measures to support the auto industry before other European governments, highlighting the crucial role the industry plays in the economy and how hard it has been hit by the coronavirus pandemic.

The plan, to be announced Tuesday, is likely to include incentives for the purchase of cleaner cars, as well as a broadening of the French effort to develop electric auto batteries, Finance Minister Bruno Le Maire has indicated.

“The automobile industry is strategic for France and it is part of our culture,” Le Maire said Monday on BFM TV. “The stimulus plan should be a game changer for our industrial policy.”

The auto plan is one of a trio of industrial stimulus packages pledged by Le Maire in recent weeks. The state already earmarked 18 billion euros ($19.6 billion) for the hard-hit tourism industry, and is preparing to help the aviation sector as well. The car industry employs 400,000 people in France, with roughly 30 vehicle and parts factories dotted across the country.

Macron’s announcement will kick off a decisive week for Renault SA. Along with Peugeot-maker PSA Group, the carmakers are among France’s largest manufacturers and were behind historic models like the Citroen 2CV and Renault 4. France owns stakes in both companies.

In the face of a collapse of the European car market, Renault is set to receive a 5-billion-euro state-backed loan in coming days. It’s also likely to announce sweeping cost cuts, possibly including some plant closures, and fresh measures to cooperate with its alliance partners Nissan Motor Co. and Mitsubishi Motors Corp.

Government incentives for buyers of newer cars are “a very effective tool” to boost sales, Le Maire has said. In addition to aid toward the purchase of electric, hybrid and low-emissions vehicles, he has promised help for small companies and parts suppliers.

He has also called for Renault to join a European-wide initiative to build electric-car batteries to cut dependence on Asian imports. PSA and oil giant Total SA outlined in January a project in France and Germany.

Germany, which will unveil its own cash-for-clunker plan in early June, is also pushing to develop a car battery industry.

Le Maire has said the government will also set conditions for the bringing manufacturing back to France and to domestically develop electric and hydrogen cars. It’s not clear how this will be done, especially since he has also said the state won’t force Renault to keep factories open.

“The biggest problem is jobs,” said Jean-Pierre Mercier, a spokesman for the CGT union. “The government has given a green light for plant closures.”

In addition to Renault, the union is expecting a trimming of capacity at PSA, which is aiming to combine next year with Fiat Chrysler Automobiles NV. That company is nearing approval of a 6.3 billion-euro ($6.9 billion) credit facility from lender Intesa Sanpaolo SpA in what would be Europe’s biggest government-backed financing to a carmaker since the start of the pandemic.

France’s auto aid package will add to pressure on public coffers. The government has already rewritten its budget forecasts twice this year, and sees debt rising to more than 115% of annual output as rescue packages mount to avoid job losses and bankruptcies.

While Macron has faced low popularity in polls, his government was rated by those surveyed as being more able to handle the economic slump than the health crisis.