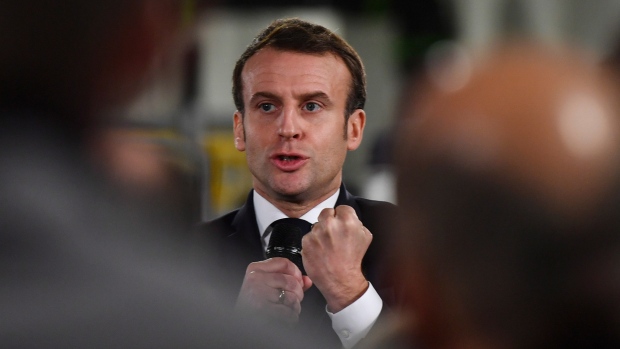 French President Emmanuel Macron and Donald Trump of the U.S. agreed a truce in their dispute over digital taxes that will mean neither side imposes punitive tariffs this year, a French diplomat said.

“Great discussion with @realDonaldTrump on digital tax,” Macron said in a tweet. “We will work together on a good agreement to avoid tariff escalation.”

Great discussion with @realDonaldTrump on digital tax. We will work together on a good agreement to avoid tariff escalation.

The two countries will continue negotiations along with their European partners until the end of 2020 in order to agree a global framework that ensures tech companies pay an appropriate amount of tax, the diplomat said.

France still hopes to find a solution that fits within the framework of the Organisation for Economic Cooperation and Development’s work on the issue, the official added, asking not to be identified in line with French government rules.

While the OECD is still working on its proposal for taxing tech companies around the world, France pushed ahead with its own levy that hit U.S. internet giants like Google, Apple Inc. and Amazon.com Inc.. In response, the U.S. president threatened to hit US$2.4 billion of French goods with tariffs in retaliation. The U.S. alleged on Dec. 2 that the French tax discriminates against American technology companies.

That dispute was another headache for European trade officials scrambling to expand their policy arsenal as the U.S. takes aim at the rules-based system for global trade. The French government had warned that the European Union would retaliate if the U.S. imposed additional tariffs.