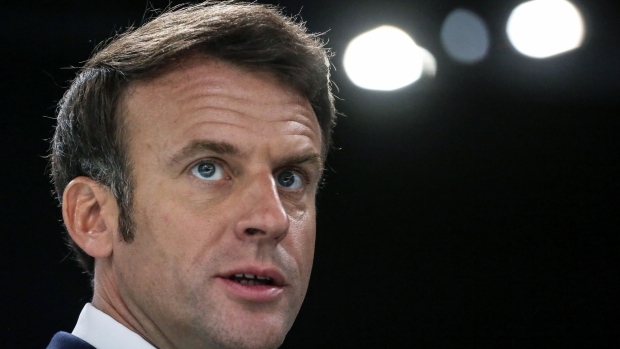 Emmanuel Macron, France's president, at a meeting on the final day of the North Atlantic Treaty Organization (NATO) summit at the Ifema Congress Center in Madrid, Spain, on Thursday, June 30, 2022. NATO's so-called Strategic Concept said in the text that China's stated ambitions and coercive policies "challenge our interests, security and values" and warned about a deepening strategic partnership between Beijing and Moscow. , Bloomberg

(Bloomberg) -- French President Emmanuel Macron is under increasing pressure to introduce a windfall tax on oil, gas and transport giants to fund his bill aimed at protecting consumers’ purchasing power.

The left-wing alliance that represents the second-biggest group of parties in the National Assembly on Tuesday proposed a temporary 25% tax on what it calls the “superprofits” of companies such as TotalEnergies SE, Engie SA and shipping company CMA-CGM, in a press conference in Paris.

“The costs of oil companies are fixed,” said Cedric Durand, an economist who’s worked on the leftist group’s program, in a text message. “When prices rise, their costs do not increase (except for the energy they use), while sales prices soar. Hence the idea of excess profits.”

Nationalist leader Marine Le Pen, whose party is also a major force in the lower house of parliament, made a similar call last month, describing oil and gas companies as “war profiteers.”

Macron has previously ruled out increasing corporate taxes while Finance Minister Bruno Le Maire has publicly pushed back on a windfall tax. But calls to change course are growing louder as the government prepares to introduce an aid package to help households hit by surging costs, and they’re not just coming from the radical left and far right.

Philippe Martin, a former advisor to Macron and chairman of the French Council of Economic Analysis, called the idea of an exceptional tax “not shocking.”

“These profits are not the result of the competitiveness or performance of these companies,” he told Le Monde newspaper. “They fall from the sky.”

The ‘purchasing power’ bill will be introduced on Thursday. It is likely to include one-off checks for poorer people, subsidies on fuel and a rise in pensions and wages for civil servants. Le Maire has said the measures will cost around 25 billion euros ($25.6 billion).

The leftist alliance says the measures are not ambitious enough, and will seek to introduce amendments during debates in parliament that start on July 18. It’s unclear how it wants “superprofits” to be defined. Some of these profits are already subjected to taxation outside of France.