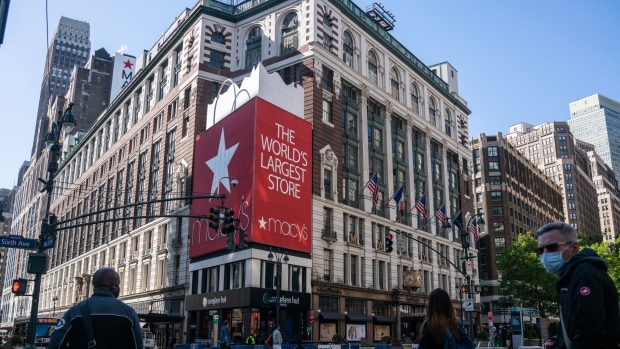 Pedestrians wait to cross a street in front of the Macy's flagship store New York on May 12. Photographer: Demetrius Freeman/Bloomberg , Bloomberg

Macy’s Retail Holdings Inc. was targeted in one of the first lawsuits against users of the controversial facial-recognition software made by startup Clearview AI.

New York-based Macy’s declined to comment on the case.

Clearview’s software allows users to try to match a face against a database of images it scrapes from the internet, including sites like Youtube and Facebook. Though it is marketed primarily as a tool for law enforcement, the New York Times and Buzzfeed News reported earlier in the year that it had also been used by several major retailers, with Macy’s conducting more than 6,000 searches.

Plaintiff Isela Carmine said in her complaint that she filed suit based on those reports. She said the technology allowed Macy’s to profit off stolen data and “stalk or track” customers, violating their privacy.

Clearview, which is not named in Carmine’s suit, has been hit with a number of lawsuits over the technology, including one by the American Civil Liberties Union. The company announced plans to halt its Canadian operations last month after the Office of the Privacy Commissioner of Canada launched a probe into whether Clearview AI collected and used personal data in its facial recognition tools without consent in February. Google and Facebook have both demanded Clearview cease using images from their sites.

Illinois has one the nation’s most stringent biometric privacy laws. Facebook recently offered to pay US$650 million to settle a lawsuit alleging it stole Illinois residents’ data through a photo tagging tool.