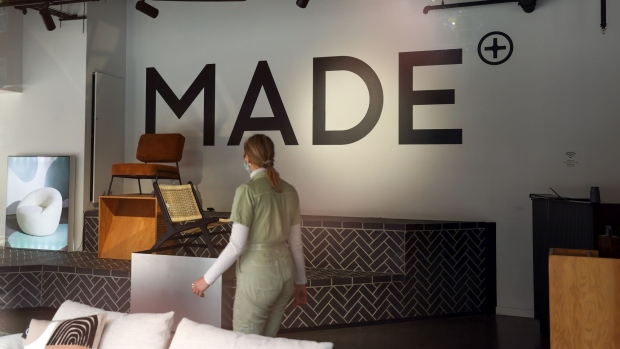 A worker inside a Made.com Design Ltd. store in London, U.K., on Thursday, May 27, 2021. Online furniture retailer Made is looking to raise 100 million pounds ($142 million) in an initial public offering in London, backed by surging demand amid lockdowns from its core base of millennial customers. , Bloomberg

Marshalls Plc: The building materials maker expects its Landscaping division to be impacted by homeowners putting off home improvement projects as their incomes are squeezed.

The next British prime minister faces a worsening fiscal outlook, raising questions about the viability of big tax cuts being promised by the two candidates vying for the job, a leading research group warned.

Meanwhile, the UK government blocked the takeover of an electronic design company by a Hong Kong-based firm, the latest example of Britain’s increasing hostility to Chinese investment.

The Glazer family would consider selling a minority stake in Manchester United FC and the Premier League club could be valued at about £5 billion, people familiar with the matter told Bloomberg. The Daily Mail later reported the Glazer family was in exclusive talks with private equity firm Apollo about the potential stake sale.

The news come as the English Premier League’s revenues are expected to exceed £6 billion this season for the first time, rapidly outpacing its European rivals.

Retail sales will cap off this week’s flurry of eco data on Friday. The volume of goods sold in stores and online is expected to have dipped 0.2% last month, following a 0.1% decline in June that was partly cushioned by a jump in food sales over the Jubilee bank holiday.

The Readout with Allegra Stratton will be back from its summer break on Aug. 30. In the meantime, here’s what Bloomberg journalists are reading this summer.