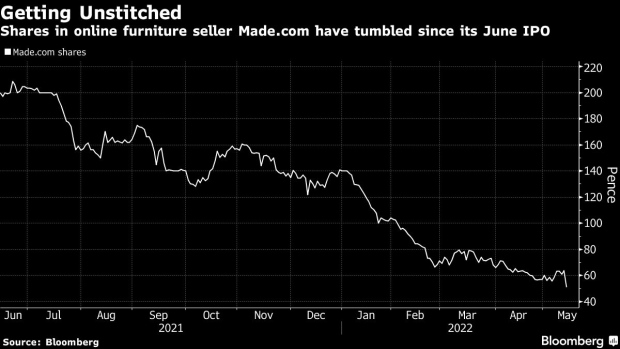 A sign above a Made.com Design Ltd. store in London, U.K., on Thursday, May 27, 2021. Online furniture retailer Made is looking to raise 100 million pounds ($142 million) in an initial public offering in London, backed by surging demand amid lockdowns from its core base of millennial customers. , Bloomberg

Made said the start of the year has been worse than anticipated and it expects the market to remain “highly challenging” for the rest of 2022.

The shares fell 20% Monday to the lowest since the IPO last year.

The cost-of-living crisis is already weighing on consumer confidence and non-essential retailers are likely to be the hardest hit. There’s also less demand for furniture and homewares as the pandemic eases and people spend more time outside the home. Global supply chain problems that have caused long lags in delivery times have heavily impacted the sellers of large ticket items, such as furniture. The overall online furniture and home market is down around 30% to 40% so far this year, the company said.

Made’s chief financial officer Adrian Evans, who has been with the company since 2017, is leaving next month to be replaced by Patrick Lewis. Lewis is the great grandson of the founder of John Lewis Partnership Plc and spent much of his career at the department store retailer, most recently as CFO.

It is the latest high-profile departure at Made after Chief Executive Officer Philippe Chainieux stepped down in February for family reasons. He was replaced by Nicola Thompson, chief operating officer.

Made is now forecasting that gross sales in 2022 could drop as much as 15% or come in flat in a best-case scenario. It expects to achieve 1.2 billion pounds ($1.47 billion) of gross sales later than 2025 as previously targeted.

The company, which earlier this month said it’s buying online marketplace Trouva, is set to be lossmaking this financial year, which is likely to raise concerns over the path to profitability into 2023, wrote analysts at Morgan Stanley.