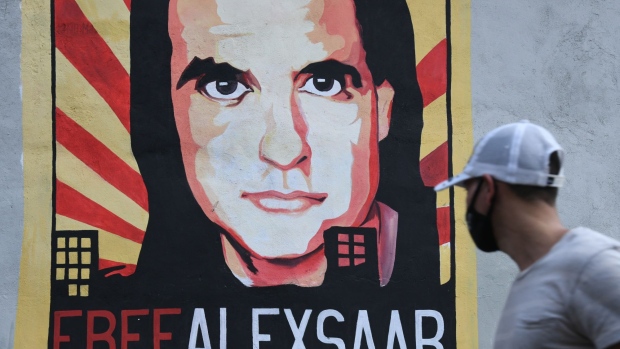 A mural in support of jailed businessman Alex Saab in Caracas, Venezuela. , Bloomberg

(Bloomberg) -- Colombian businessman Alex Saab, who allegedly brokered crooked deals for Venezuela’s government while stealing hundreds of millions of dollars from the country, made his first appearance in a U.S. court after losing a drawn-out extradition battle.

Saab, 49, who appeared by video on Monday from a jail cell with shoulder-length hair and wearing an orange prisoner’s jumpsuit, faces eight counts of money laundering and conspiracy in federal court in Miami. The government requested he be held without bail until trial, while his lawyer asked for time to hold a pre-trial detention hearing.

Saab, a dual Colombian-Venezuelan citizen, has emerged as a key figure in the standoff between Washington and Caracas as the U.S. government goes after figures once close to President Nicolas Maduro, for whom they have posted a $15 million reward for information leading to his arrest or conviction. Following Saab’s extradition from Cape Verde on Saturday, Maduro’s government pulled out of negotiations with Venezuela’s American-backed political opposition, referring to the case against Saab as “a new act of aggression by the U.S.”

Saab has denied wrongdoing through lawyers and in a statement read by his wife Sunday. At Monday’s hearing he spoke once through an interpreter over a phone as he sat behind a table, his legs fidgeting, only to acknowledge the name of his lawyer, Henry Bell.

The charges against Saab, made in 2019, stem from his involvement with the Venezuelan government starting in 2011 under late president Hugo Chavez. Saab and his business partner Alvaro Pulido allegedly were involved in a money laundering and bribery scheme while working on a government contract to build low-income houses.

Saab was detained in Cape Verde last year after the plane he was on stopped to refuel while on the way to Iran. He spent nearly 500 days in jail before Cape Verdean authorities turned him over to U.S. Marshals on Saturday.

Saab rose to prominence after Venezuelan news outlet Armando Info cast light on deals he secured to supply Maduro’s flagship nationwide food program, known as Clap. Over time, his role developed into a commercial dealer for the Maduro government, providing everything from medicines to gasoline, imported from Turkey and Iran.

At the same time, Saab and Pulido allegedly transferred $350 million out of Venezuela into accounts they owned or controlled, according to the Justice Department.

At first, both Saab and the Venezuelan government denied they had a relationship. But after his arrest in Cape Verde, the Maduro government referred to Saab as a special diplomatic envoy and his attorneys based his defense on grounds of diplomatic immunity.

Maduro tried again to halt Saab’s extradition to the U.S. by appointing him to the government’s negotiation team in talks with the country’s political opposition that began in August in Mexico City. The talks, mediated by Norway, sought to end the country’s political stalemate and reach an agreement for free and fair elections.

After Saab was extradited, Maduro’s team pulled out out of the talks just as a new round of meetings was set to begin. Maduro defended Saab as a key provider of goods for the country and accused the U.S. of violating international laws by “kidnapping” and “torturing” his ally.