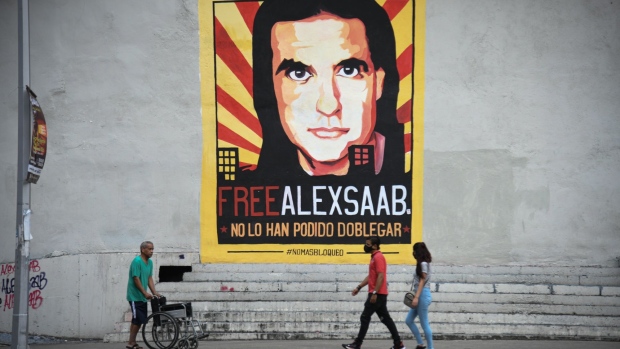 Pedestrians walk past a mural supporting jailed businessman Alex Saab in Caracas, Venezuela, on Friday, Sept. 17, 2021. Saab, a Colombian jailed in Cape Verde for alleged money laundering in his dealings with procuring food goods for a Venezuelan government program, is awaiting extradition to the U.S. after losing multiple appeals. , Bloomberg

Alex Saab was flown out of the archipelago nation off the West African coast on Saturday afternoon, his legal team said.

“The extradition has been completed,” Femi Falana, a counsel for Saab, said by phone from Lagos. “We believe Saab’s being transported to Florida to stand trial.”

Flight tracker Flightaware showed a plane belonging to the U.S. Justice Department leaving the Amilcar Cabral International Airport on the island of Sal at 4:53 p.m. local time on Saturday.

Saab, 49, has been detained in Cape Verde since June 2020, when his private plane stopped in Sal to refuel while flying from Venezuela to Iran.

A U.S. federal court in Florida has indicted him on money-laundering charges related to bribing Venezuelan officials. He has denied the charges through his lawyers.

The extradition also poses a risk for negotiations between the Venezuelan government and the opposition, which are set to restart Sunday in Mexico City. The government had appointed Saab as a member of its delegation to protect him from extradition.

His legal team previously said that as a Venezuelan envoy to Iran, Saab should not have been arrested in Cape Verde. The extradition took place on the eve of Cape Verde’s presidential elections scheduled for Oct. 17.