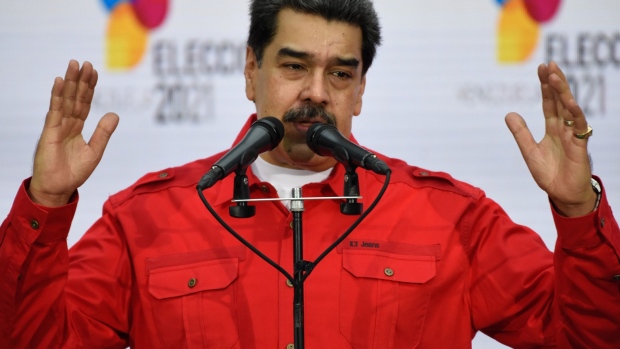 Nicolas Maduro, Venezuela's president, speaks to members of the media after casting a ballot at a polling station during regional elections in Caracas, Venezuela, on Sunday, Nov. 21, 2021. Venezuelans go to polls Sunday in regional elections poised to strengthen President Maduro as the country's political opposition slips further into disarray. , Bloomberg

(Bloomberg) -- European Union electoral monitors are being kicked out of Venezuela days before their scheduled departure amid a clamp down by the government of Nicolas Maduro following last month’s elections.

E.U. analysts and a handful of staff members will fly out this weekend after the foreign ministry refused to extend their visas, according to a person with direct knowledge of the situation. They received an order to leave the country from the foreign ministry and the National Electoral Council, the person said.

Neither the ministry nor the electoral council responded to messages seeking comment.

The team had planned to be in the country until Dec. 13 under a schedule agreed to with the council and blessed by Maduro’s government.

But tensions began to grew in the run up to the election when Maduro preemptively dismissed their findings. He then accused the monitors of being “spies” following the release of a preliminary report that pointed out shortcomings and irregularities in the Nov. 21 regional elections. The decision to kick them out early further stains elections that Maduro has promoted as free and fair.

The country’s high court, which is stacked with government loyalists, has already intervened in a governor’s race, calling a repeat after an opposition candidate led in the vote count. Authorities have harassed mayors elected from opposition parties. In another state race won by the opposition, Maduro is stripping the governor-elect of some powers.

The E.U. sent 130 people to monitor the vote, its first delegation in 15 years. While most observers already left, those that remain were conducting interviews, following up on objections to the electoral process from candidates and parties, and gathering information for a final report they plan to release by early February.

The delegation was not told why their trip is being cut short, the person said.