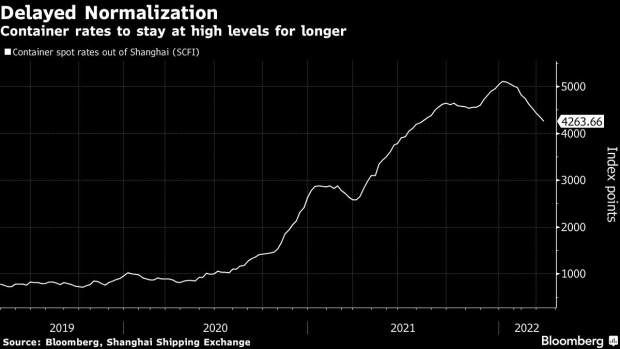 A lorry pulls an A.P. Moller-Maersk A/S branded shipping containers along the dockside at the Port of Felixstowe Ltd., a subsidiary of CK Hutchison Holdings Ltd., in Felixstowe, U.K., on Friday, March 22, 2019. Container terminals including Felixstowe, Southampton, London and Teesport stand to benefit from a no-deal Brexit because, unlike ferry ports, their reliance on traffic from Asia and the Americas means they’re already geared up for the customs checks that could accompany a no-deal split. , Bloomberg

(Bloomberg) -- A.P. Moller-Maersk A/S raised its full-year operating-profit forecast by $6 billion as the container giant said the booming market will normalize later than it previously expected.

Maersk expects to report a 2022 profit of about $30 billion, measured as underlying earnings before interest, tax, depreciation and amortization, the Copenhagen-based company said in a statement on Tuesday. That’s up from the $24 billion Maersk predicted in February and compares with an average estimate of $28.3 billion in a survey by Bloomberg.

Maersk said that results were driven by an “exceptional market situation” with high freight rates, which now are expected to continue into the second quarter. The company, which transports about one-sixth of the world’s containers, said it expects the market to normalize in the second half of the year.

Maersk now sees a risk of the global container market contracting this year. Global demand may decline 1% or rise 1%, it said, cutting a previous forecast of 2% to 4% growth. Maersk is due to report its first-quarter results on May 4.

(Updates with details from fourth paragraph)